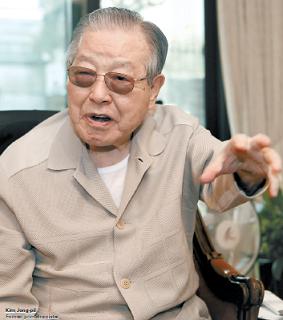 Among other achievements, former two-time Prime Minister Kim Jong-pil is often credited with tackling the most difficult issue in the negotiation process to normalize relations between Seoul and Tokyo - that of reparations in the form of grants and loans for Japan’s occupation of the peninsula.

His successful meeting in November 1962 with Masayoshi Ohira, the Japanese foreign minister at the time, is considered the breakthrough that enabled the Korea-Japan Basic Relations Treaty to be signed on June 22, 1965.

On Sunday, Kim, now 89, sat down for an interview with the JoongAng Ilbo at his residence in Sindang-dong in central Seoul.

He had refused interviews with other Korean and Japanese media outlets, including NHK, despite numerous requests to do so to mark the 50th anniversary of bilateral ties.

“I was labeled a traitor after I knotted Korea-Japan negotiations 50 years ago. Who, exactly, is to blame for Seoul and Tokyo’s relations being driven to this extreme?” the former Korean Central Intelligence Agency director said in explaining why he turned down multiple interview requests.

“President Park Geun-hye and Prime Minister Shinzo Abe have to recover Korea-Japan relations with the intent of untangling the knot that they have created.”

Kim served as the right-hand man to the late President Park Chung Hee and held an unprecedented meeting with Japanese Prime Minister Hayato Ikeda on Oct. 25, 1961, which helped pave way for the conclusion of the treaty to normalize bilateral relations.

The following year, he conducted tough negotiations with Foreign Minister Ohira. At the time, Park ordered him not to settle for less than $800 million - which was no small amount considering Japan’s foreign exchange reserve was $1.4 billion - a demand Kim was able to fulfill.

The treaty was concluded two and a half years later on June 22, 1965, in spite of fierce opposition and student demonstrations the previous year.

“I don’t want to speak to the media or to the public in a situation where our relations has become difficult, as if I had done something well,” Kim said. “The Japanese people need to know why I refuse their interview requests. After all, Prime Minister Abe didn’t stop this mess.

“And there is no problem with our government’s policies toward Japan. It’s problematic to deal with national history, getting ahead of the situation and being caught up in wishful thinking. Prime Minister Abe will not easily bend, and President Park Geun-hye’s principles are too strong. If the two leaders step down, that’s that, but the relationship between Korea and Japan is forever. I hope the two can hold on to a sense of responsibility and resolve these issues.”

“Emotions must not be mixed in with diplomacy,” he added. “At times, diplomacy is when there is no ‘yes’ or ‘no.’”

Q. What is the current situation of Korea-Japan relations?

A. It’s like a fog so thick that you can’t see through it, and it shrouds both nations. Who will clean this up and capitalize on good relations for tomorrow? The leaders of Korea and Japan must take responsibility for pushing through with this. For whatever reason, President Park and Prime Minister Abe are stuck in a rut; they need to wipe away any personal feelings about each other. A path in the spirit of mutual cooperation has to be decided upon for the future of both countries. Fifty years ago, I was labeled a traitor because I forged renewed relations between Korea and Japan. President Park and Abe need to recover bilateral relations with the mindset that they will set straight the problems they have created.

What sort of posture do the two leaders need to take?

When diplomatic relations become tangled, the people are the ones who are harmed. A narrow-minded attitude has to be abandoned and an open-minded posture must be taken. When the time comes, [Park and Abe] will step down, but the people are forever. An open-minded position will be what can enable a foothold for the people of both nations to forge everlasting friendly and amicable relations. Courage to transcend human and emotional relations is necessary. I hope the two can emerge from this thick fog.

What kind of mindset did you take when entering into negotiations to normalize bilateral ties?

I thought of the geopolitical conditions that Korea faced in the 1960s. Even then, same as now, Korea’s survival and prosperity lay in diplomacy. With Communist China in the west and the Soviet Union in the north, there was nowhere to go over land. We are like an appendix hanging at the end of the continent, aren’t we? To the south, spanning over 3,000 kilometers, is Japan. In order for us to live, Japan needed to be a stepping stone to the Pacific and the Indian Oceans. Even if we didn’t like Japan, we had to open up a way for us to survive. That was what I was thinking.

Your counterparts in the negotiations were experienced veterans two, three decades older than you.

The fact that they were of the era that had [experienced World War II] was rather helpful in the negotiation process. Likewise, I’m of the war era, in that 40 percent of my classmates at the Korea Military Academy fought on June 25 [the day the 1950-53 Korean War broke out]. Those from that time know from experience the wretchedness of war and how precious peace is. We had a tacit understanding that we had to cooperate so that our descendants may enjoy lasting prosperity.

Is there anything you would like to ask of Prime Minister Abe?

He has to look at history straight in the face and, with a sincere heart, apologize and self-reflect. No matter how hard you try, history cannot be covered up. Between Japan and the rest of Asia, if you cross over to another country, a hero can become a foe and a foe can become a hero.

Hirobumi Ito [the first Japanese resident-general of Korea and the former prime minister of Japan] was a Meiji Restoration veteran statesman in Japan, but in Korea, he was an instigator of invasion. Abe may be lacking a mature mindset that can account for this. The Korean people also need to recognize that strained relations with Japan will make things more difficult.

Do you have anything you want to request from the postwar generation in either country?

I hope that the postwar generation can appreciate the humane depth and understanding in the words, history and art of the previous generation. The people of both nations must develop their power to select political leaders who can understand each other culturally. When governments are pitted against each other, the people need to continue with personal exchanges and cooperation.