War pilot takes to the skies after 44 years

War pilot takes to the skies after 44 years 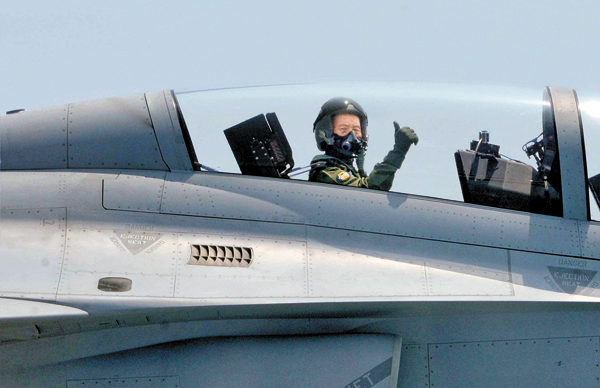 Former Air Force Chief of Staff Kim Too-man, who set a record for flying 100 sorties during the 1950-53 Korean War, soars through the sky on Tuesday in an FA-50 domestic fighter plane in his first flight since being discharged from the Air Force in August 1971. Inset is a picture of Kim taken during the war. Provided by the Air Force

In the mountain valley was a North Korean supply depot for the Eastern Front, and Kim’s mission was to launch a rocket at the supply cave.

He almost crashed his plane into the mountainside trying to destroy the depository, but pulled up on his control stick just in time, narrowly avoiding a collision.

Upon completing his mission, Kim returned to base, where his comrades rushed at him, raising him onto their shoulders to congratulate his success.

Kim had just set an Air Force record for flying 100 sorties - military terminology to refer to a combat mission by a single aircraft.

He went on to serve as the Air Force chief of staff and was later discharged in August 1971, never to fly again.

That is, until Tuesday, when the four-star general and Air Force reserve officer, now 88 years old, stepped into the cockpit of Korea’s first domestic supersonic fighter jet, an FA-50, taking to the skies for the first time in 44 years.

Partnering with Air Force Major Han Seong-wu, 37, Kim took the rear seat and flew over the areas in North Chungcheong, Gyeonggi and Gangwon where he had flown missions during the war.

He successfully ended his flight after 50 minutes and, as they had done in the past, his subordinates lifted him up on their shoulders.

“It was a short time, but an honor to fly with a hero from the Korean War,” Han said.

“I will defend [our] airspace, taking after [Kim’s] devotion and spirit of sacrifice,” he promised.

Afterward, Kim noted that he was impressed by how much Air Force technology had advanced.

“If the fighter planes we rode during the Korean War were analog, then today’s planes are digital,” he said.

The opportunity to fly again resulted, in part, from Kim’s appreciation of modern aircraft technology, specifically the FA-50 fighter plane he piloted alongside Han.

“After seeing the FA-50, I wanted to ride it myself. So I told [current] Air Force Chief of Staff Choi Chakyu that I wanted to ride a fighter plane made in Korea before I died, and he arranged an opportunity for me to do so,” Kim explained.

“In 1949 I was commissioned as a cadet, and on Oct. 1 of that year, the Republic of Korea Air Force was founded. The Korean War broke out in June the following year, and the Air Force didn’t have a single fighter plane,” said Kim. “We only had 20 L-4 and L-5 liaison planes, and on May 1950, we introduced 10 T-6 trainer airplanes from Canada, purchased with $350,000 in public donations.”

“Peace does not come on its own, but rests on our abilities and efforts,” Kim said. “And we must be strong to keep the peace.”