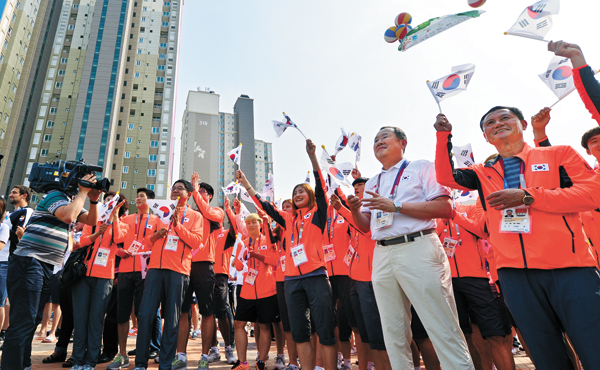 Korean athletes and staff for the 2015 Summer Universiade participate in the flag hoisting ceremony at the Athletes’ Village in Gwangju on Thursday. [NEWSIS]

A year after Gwangju won its bid for the Summer Universiade, the organizing committee decided in August 2010 to use the 30-year-old Hwajeong Jookong Apartment Complex as the site of the Athletes’ Village. The complex was demolished and rebuilt beginning September 2012, and the village officially opened June 26.

Running until July 17, the village is divided into three zones: International Technical Official Village, International Zone and Residential Zone. Located 10 minutes from the main stadium, the buildings will accommodate more than 12,000 people.

Three sizes of apartments - 59, 84, 101 square meters (635, 904 and 1,087 square feet) - are offered to athletes, and depending on the size, four to seven people will live in each. The units feature air conditioning and Wi-Fi, but the athletes will not be allowed to use certain kitchen facilities to keep the apartments, which will be sold to the public after the event, in brand-new condition.

The organizers have organized the buildings by continent, but some countries in conflict are separated even if they’re on the same continent. Athletes from Israel and Palestine, for example, will live in separate buildings.

Russia is the only country that will use an entire building for lodging since it has sent more than 600 athletes. In another building, athletes from 26 countries will live together.

Athletes from Korea will share a building with those from Lebanon.

The organizers used the buildings’ underground parking lot as the main dining hall, which is always open and has and has 3,500 seats. Including 300 chefs, 700 people will work in this dining hall to prepare 80 to 90 kinds of foods per day. About 300 menus will be served during the event, including halal options for Muslims.

The village also has a medical center with 20 doctors, 30 nurses and 70 volunteers. In addition to a 24-hour emergency room, nine types of medical services including oriental medicine will be available until 9 p.m.

To prevent the spread of Middle East respiratory syndrome, the Korea Centers for Disease Control and Prevention has already dispatched employees to the village.