All eyes on Ki and Lee

All eyes on Ki and Lee 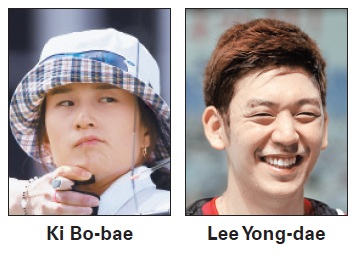 As Korea aims for a top-three finish at the Gwangju Summer Universiade, two of its most promising athletes are badminton player Lee Yong-dae and archer Ki Bo-bae. The team captains are expected to make contributions to Korea’s goal of 25 gold medals at the competition for university athletes worldwide, which kicked off Friday in South Jeolla.

In an interview with Korea JoongAng Daily affiliate JoongAng Ilbo last week, Ki shouted the Korean delegation’s slogan - “Give us love and we’ll make you proud” - while Lee said he wants to give energy to Koreans suffering from Middle East respiratory syndrome (MERS).

The two athletes have much in common. Born in 1988, both are Universiade and Olympic gold medalists. The two also recently suffered setbacks and aim to make a comeback at this event.

Lee became a star after winning gold in mixed doubles at the 2008 Beijing Olympics. With his good looks - similar to singer Lee Seung-gi - and a victory celebration involving a sly wink at the camera, the 180-centimeter (5-foot-10) player gained many fans.

However, Lee had a tough time last year. He received a one-year suspension from the Badminton World Federation, which charged him with dodging a doping test after failing to report his location to the World Anti-Doping Agency.

“When I first heard about the suspension, I thought the problem would smooth itself out because it wasn’t as though I’d taken a banned substance,” Lee said. “My friends consoled me by saying it wasn’t my fault, but it was a really difficult time.”

During his suspension, Lee was prohibited from participating in competitions and training with his team.

“I spent about a month at my house in Namyangju, Gyeonggi,” he said. “After calming my mind, I visited my hometown [in Hwasun, South Jeolla] to focus on my physical training.”

Fortunately, Lee’s supposed infraction was later revealed to have been an administrative mistake by the Badminton Korea Association.

His suspension was lifted after just three months, and he began to play again in April.

“I had no time to look back at myself [during the suspension], because all I could think about was badminton and moving forward,” he said. “I realized how happy playing badminton makes me when I wasn’t allowed to play.”

Lee came back swinging, winning gold in the team event and silver in men’s doubles at the Incheon Asian Games.

Ki snagged two golds at the 2012 London Olympics and became a national star, lauded for her calmness in nail-biting situations. The recurve archer went on to win gold medals at the 2013 World Archery Championships.

But last year, she failed to earn a spot on the national team for the Incheon Asian Games. Instead of handling a bow and arrow, Ki was given a microphone and worked as a television commentator for her teammates’ events.

“I became lazy after the London Olympics, but I reflected on myself and what I wanted when I worked as a commentator,” she said.

“Archers look most beautiful when they stand on the line, aiming for their target. I didn’t want to be forgotten like that.”

Ki regained her spot on the national squad in April, when she passed the selection trial in the extra rounds. She went on to lead Korea to win gold medals at the Archery World Cup in Shanghai this May.

This year’s Universiade is also to be their last. The International University Sports Federation (FISU) states Universiade athletes should be undergraduate or graduate students between the ages of 17 and 28.

At Gwangju, Lee will team up with Ko Sung-hyun rather than current partner Yoo Yeon-seong, with whom he shares the world No. 1 rank in men’s doubles.

However, Lee and Ko are still a familiar pair - they partnered at the 2013 Summer Universiade and won gold medals in the men’s double and team event.

Both see the Universiade as a tune up for the Summer Olympics in Rio de Janeiro next year. Lee said he wants to maintain his world No.1 ranking until Rio and take gold, while Ki hopes to become the first Korean archer to defend the individual title at the games.

The athletes are also drawing strength from this Universiade’s location in South Jeolla.

Lee was born in Hwasun, South Jeolla and will be competing at hometown venue Hwasun Hanium Culture Sports Center.

Ki, on the other hand, says she considers Gwangju a second home after doing both her undergraduate and graduate studies at Kwangju Women’s University. Her archery team is Gwangju City Hall.

Ki is already off to good start. She set the world record at the preliminary for the women’s individual recurve archery competition on Saturday, getting 686 points out of a possible 720. Ki rewrote the previous record set by compatriot Park Sung-hyun, who had 682 points in 2004.

Ki will have a round of 16 match today before the gold medal event on Wednesday.

Lee will first go for the team gold medal Wednesday before the double’s final Sunday.