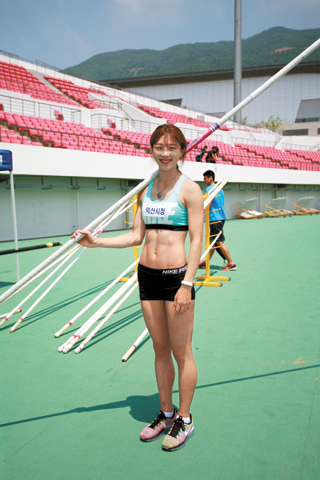 Last year during the Incheon Asian Games, Choi Ye-eun was startled to find her name as the top-searched word on an online portal. People were saying the 20-year-old pole vaulter, with her good looks and impressive abdominal muscles, was a “new flying beauty.”

But Choi wants to be remembered for her skills as a pole vaulter, not her appearance. At the Incheon Asian Games, she finished fourth after clearing 4.05 meters (13.29 feet), but she’s aiming higher at the 2015 Summer Universiade in Gwangju.

Choi has the best record among Koreans this year. At the Busan International Pole Vault Championship in May, she set her personal best and won the event by clearing 4.2 meters.

Despite her impressive skills, Choi is still best-known by local sports fans for her beauty. When asked about her looks, the 175-centimeter (5-foot-9) vaulter demurred.

“My teammates say I appear mature, but how I look in real life and in photographs is very different,” she said. “[But] I thank my parents for my looks and if I had to pick one, I’d say my dimple is my most attractive feature.”

But with her beauty comes numerous scars, the result of her dedication to the sport. Her hands are always blistered from grabbing the 4-meter, 2.5-kilogram (5.5-pound) pole.

“The scars don’t stress me out,” she said.

Choi won her first pole vault competition at an event in her hometown of Gimje, North Jeolla, when she was a fourth grader at Yongji Elementary School.

“When I was young, I liked playing piano and in middle school, I played janggu [Korean traditional drums],” she said. “I liked things I could do actively.”

The Jeonju University student said that she quit playing sports in sixth grade because they were too physically demanding, but the 2008 Beijing Olympics changed her life again.

“I watched judoka Choi Min-ho win the gold medal after overcoming his injury, which gave me goosebumps,” she said. “I wanted to be a person who can also move people’s hearts through sports.”

At first, Choi struggled to get over the bar using a pole more than twice her height. But coach Chung Bum-chul said her positive mind-set made her a quick study.

As she began to dominate pole vault competitions nationwide from her senior year of middle school, the Korea Association of Athletics Federation selected Choi as top prospect who needs long-term support.

Choi begins preliminary round Wednesday before going to a final Thursday. Experts say if she can beat her personal best record of 4.2 meters, medaling isn’t a long shot.

In the 2013 Summer Universiade in Kazan, Russia, the bronze medalist recorded 4.3 meters.

“I feel responsible because people are paying attention,” said Choi who claims she even cleared 4.4 meters in her practice sessions. “I really want to win a medal in the Universiade.”