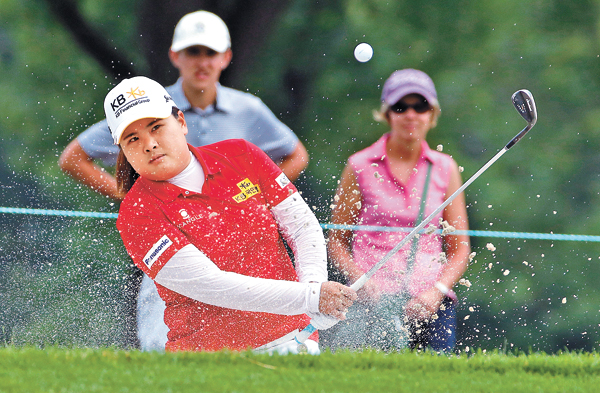 Park In-bee hits out of a bunker during a practice round for the U.S. Women’s Open at Lancaster Country Club in Lancaster, Pennsylvania, Tuesday. Twenty-six Korean golfers will compete in the season’s third major tournament. [AP/NEWSIS]

World No.1 Park In-bee and 25 other Korean golfers are set to tee off at the U.S. Women’s Open, the season’s third major golf tournament, beginning Thursday at the Lancaster Country Club in Lancaster, Pennsylvania.

Hall of Fame golfer Pak Se-ri was the first Korean to win the tournament. The 37-year-old delivered a historic win in 1998 with a barefoot shot from a pond.

This year, 26 Koreans, including amateurs Lee So-young and Youn Min-gyeong, are competing, accounting for 17 percent of the 156 golfers. They will be aiming to collect the prestigious trophy, along with $720,000 of the total $4 million purse.

If she wins this time, Park will be the seventh golfer in history to win the U.S. Women’s Open three times.

Park, who turns 27 on Sunday, has been strong in the majors. With her latest victory at the KPMG Women’s PGA Championship last month, Park has won five of the last 12 major championships.

If she wins this tournament, the Seoul-born golfer will rank seventh on the all-time majors win list with seven victories, and will tie her for the most wins among active players with Juli Inkster and Karrie Webb.

“I think as a golfer you want to do well in major championships, and obviously that’s the tournament that you put 100 percent of your energy and strategy and everything,” Park told the LPGA on Tuesday. “So I definitely really do care about the major championships.”

Park, a 15-time LPGA Tour winner, is coming off her only missed cut of the season at the NW Arkansas Championship two weeks ago, but history shows she rebounds quickly. After each of her missed cuts the past two seasons, Park went on to win just two weeks later. In 2014, she took the Manulife LPGA Classic and in 2013, she won the Wegmans LPGA Championship.

In the first two rounds, Park is paired with compatriot and world No.4 Kim Hyo-joo, who is coming off from last week’s victory at the Kumho Tires Ladies Open in China. She will also play against Brittany Lincicome, winner of the season’s first major tournament in April, the ANA Inspiration.

But second-ranked Lydia Ko is also considered a top contender. The 18-year-old Korea-born Kiwi could take Park’s top spot if she wins the event and Park finishes at 7th or worse.

Ko is in same group with the 2011 champion Ryu So-yeon and last year’s runner-up Stacy Lewis.

Top Rookie of the Year contender Kim Sei-young is already facing difficulties after being forced to replace her caddie. The United States Golf Association confirmed that Paul Fusco, Kim’s caddie since December, had taken photos of possible hole locations and course setups with his phone and is banned from the tournament.

Local reports said 22-year-old Kim hired Steve Shellard as a substitute. Shellard used to work with Pak Se-ri, who is not participating in the tournament due to injury.

Choi Na-yeon, the 2012 champion and winner of the NW Arkansas Championship last week, will tee off with Cristie Kerr and Lexi Thompson, both Americans.