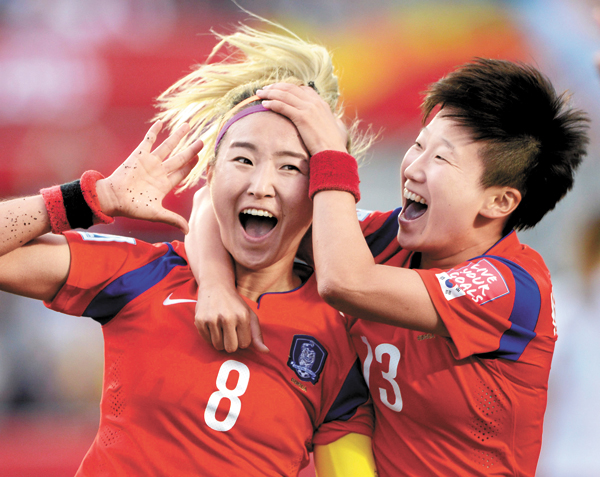 With her yellow hair and energetic play, Cho So-hyun shined at the 2015 FIFA Women’s World Cup, where Korea reached the round of 16 for the first time. The 27-year-old team captain notched a goal against Spain in Korea’s 2-1 victory, the country’s first Women’s World Cup victory.

After her impressive performance, rumors circulated that Cho, who plays for the Incheon Hyundai Steel Red Angels, is being sought by clubs overseas. In an interview last week with Ilgan Sports, an affiliate of the Korea JoongAng Daily, the central midfielder said she wants to play in Germany, France or Sweden if she gets an offer.

Cho started playing football with her younger brother when she was a sixth-grader. Her mother expected that she would quickly quit the sport because of its physical demands, but football has become an important part of her life.

Q. How was the World Cup for you?

A. I really have memories of being tired in Canada, because in every match, we had to give 120 percent, not 100 percent. But it was good because I experienced something that I hadn’t experienced before. After the World Cup, I noticed that more fans have come to see WK League matches and felt a responsibility. I am confident that if we do well, women’s football will be better recognized and more fans will come to see us.

Which World Cup match do you remember most?

The game against Spain gives me the best feeling, and the game against France makes me sad. Personally, my goal was to reach the quarterfinals, and it’s a shame that we didn’t. I just wanted to advance further because there is no other tournament to allow us to show what we can do. If we had reached that far, our team would have been promoted better and the players would have gained more confidence by playing against the world’s best teams.

Well, I did hear that I’m like Ki Sung-yueng [of Swansea City], but because of comments by assistant coach Kim Eun-sook, there was talk that I’m like Kim Nam-il [the defensive midfielder on the 2002 FIFA World Cup team.] But personally, I don’t like being called a “women Kim Nam-il.” I think people call me that because I’m strong and show a hardcore defense, but I do have other skills. In fact, I’m only rough on the pitch, and I usually am shy.

After all, I’m captain of the team. But I also feel tired and upset when we draw or lose. But to lead other players, you have to be strong mentally. I don’t read harsh comments online. There are people who like to criticize, but there are also those who point out the right things. Some players see this, but since this kind of attention was a new thing, there are players whose feelings are hurt.

You seemed to think a lot about the development of women’s football here.

First, there should be good youth programs to find good players. It would also be good to have more club activities in football with girls and boys playing together. In my personal experience, I was bored by tightly scheduled training in which you practice, sleep and eat at scheduled times. When you watch foreign players, you see that they just play football after finishing their work. You need to play it and have fun. I heard that France has 80,000 women footballers. I thought the French players really looked like professionals in the World Cup, and I envied their motivation. We should keep working to improve our environment.

You were known for studying English assiduously. Did that help in Canada?

I’ve been studying English for about six years and taking personal lessons for the last 18 months. I’m not fluent in conversation, but I can speak at just about the level where I won’t starve overseas. My goal is to go to graduate school, but the degree I want is not well established in Korea, so I’m thinking of going overseas. Sports marketing and sports management are well established elsewhere, so I need to study English harder.

What are you planning for the future?

As I said, I want to study sports marketing or management. But my boyfriend told me to play football while I can, joking that I could play until I’m 40 (laughs). But there are things I want to do, like playing football after marriage and even after becoming a mother.

Do you plan to become a coach?

Coaches around me have said that I would be a good coach, but I think that narrows choices for my future. I think studying marketing will give more opportunities to do other things. In fact, I think if I become a coach, I would be a tougher coach than An Ik-soo [the former women’s national team coach.] When I exercise, I do it seriously, and there was even a time where I made a young teammate cry by pushing her to stay focused. I’m not thinking of getting a coaching license at the moment.

You are a “tough sister” on the pitch, but you seem like a gentle lady off it.

What I have heard most from people is that I look different than I do on television. On TV, I look like a big footballer, but people who have met me in person say, “You are smaller and skinnier than I thought.” In fact, in my daily life, I can be engaging, but only two people on earth know that: my boyfriend and my teammate Kim Do-yeon, who is also my best friend. I used to be quite an introvert, but because of Kim I became more outgoing.

But still there is an image of female footballers who don’t look like normal women. People think girls with short hair who look like boys are the ones playing women’s football. But we also have boyfriends and go out on dates, and I think it’s important to promote that kind of image to the public. After all, we are all women and we don’t want to hear that we are like men. In the past, people said, “Why aren’t beautiful women in football?” but nowadays, more women footballers put on makeup, and people now say, “Why are you putting on sun cream? Just play football!” (laughs).

Why did you cut your long hair after the World Cup?

People said I looked more like a lady after the haircut (laughs). I pay more attention to my looks after having my hair cut to avoid looking like a boy. I dyed my hair blond because that was something I wanted to do before I reached 30. Before having my hair cut, I asked my boyfriend if he would not marry me if my hair was short, but he said it was all right. So I got a haircut and he liked it.

Your boyfriend seems to be very understanding.

We met over two years ago. He said since I have a job that is unlike others, he tries to understand a lot, for which I’m very thankful. My teammates also envy me because my boyfriend is kind and cares a lot about me. They say that they want to meet a person like him (laughs). My boyfriend’s friends also envy him because I’m a girlfriend who can play football with him.

Are you going to get married?

My boyfriend’s family is telling us to get married while we can. Old people may not like women who play football, but my boyfriend’s parents really like me. We’ll probably get married at the end of this year or early next year.