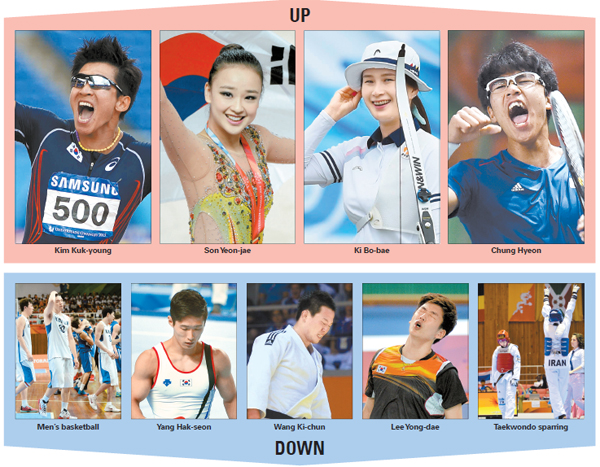 The 2015 Summer Universiade wrapped up its 12-day run on Tuesday in Gwangju, with host Korea finishing atop the gold medal chart for the first time.

Before the world university games opened on July 3, there were concerns about whether it would be a success. The Middle East respiratory syndrome outbreak here cast a pall over the games, leading several countries to withdraw for that reason. North Korea also withdrew just a week before the game, miffed at the opening of a UN human rights office in Seoul.

But with 13,000 athletes and officials from 146 countries in Gwangju and nearby venues, the 2015 games went smoothly, and the baton was handed to Taipei, which will host the next Summer Universiade in 2017.

“I’d like to thank the many Gwangju citizens and volunteers for their mature civic consciousness, their spirit of sharing, their sense of camaraderie and their generosity,” Gwangju Mayor Yoon Jang-hyun, who is also head of the Gwangju Universiade Organizing Committee, said Monday. “I want everyone who has been involved in the Universiade to remember Gwangju.” 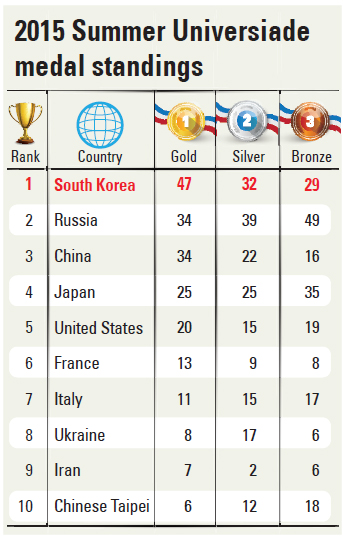 Unlike other international sports competitions, national anthems are not played during the medal ceremonies at the Universiade. Instead, the International University Sports Federation anthem “Gaudeamus Igitur” (“So Let Us Rejoice”) is used, as a means of emphasizing camaraderie over national pride.

But there is still a medal count to measure the athletes who competed in 21 sports here. Korea collected 47 of the 272 gold medals awarded at the games, along with 32 silver and 29 bronze.

Russia, which had won 156 gold medals to top the 2013 Summer Universiade on its home turf in Kazan, finished in second place here with 34 golds, but collected the largest overall number of medals, with an additional 39 silver and 49 bronze.

China was third with 34 gold, 22 silver and 16 bronze medals, followed by Japan and the United States. Sixty-four countries won at least one medal in Gwangju.

This is the first time Korea has topped the Summer Universiade in gold medals. In Winter Universiade competitions, the country placed No. 1 in 2007 at the games in Torino, Italy.

“We first set our goal to be in the top three ahead of Japan, but had a better result than our expectations,” Korea University Sports Board Chairman Yoo Byung-jin said on Monday. He also headed the Korean delegation at the Universiade. “Since the event was held at home, I think the athletes performed above their talent.”

Sports pundits say that Korea’s impressive finish was helped by the home-field advantage; the host nation can select eight of the 21 sports at the Summer Universiade. Korea selected

golf, badminton, shooting, baseball, archery, rowing, taekwondo and handball, in most of which Korea traditionally excels. Korea also sent its largest delegation ever to a Universiade, 516 strong. Many were promising young athletes aiming for the Summer Olympics next year.

“Our athletes can work harder for the Summer Olympics in Rio de Janeiro with the confidence gained here,” Yoo said. “But I hope we will set policies and measures to systemically foster sports like track and field, swimming and gymnastics.”

Korea’s impressive run at the Summer Universiade started with victories in judo, which produced eight gold, five silver and two bronze medals. The only thing that might have made Koreans mutter into their soju was that both the men’s and women’s teams lost to arch-rival Japan in the team event finals.

Cho Gu-ham, who competed in the men’s under-100 kg category, was Korea’s first gold medalist in this Universiade, defeating Clement Delvert of France on July 4. Kim Won-jin (under-60 kg), An Ba-ul (under-66 kg) and Gwak Dong-han (under-90 kg) also won gold. In women’s judo, Jeong Bo-kyeong (under-48 kg), Kim Seong-yeon (under-70 kg) and Kim Ji-youn (open-weight) found gold.

An Chang-rim, the son of second-generation Japanese-Korean parents, was in the spotlight after winning the men’s under-73 kg event on July 6, when he said his dream since early childhood had been to beat a Japanese judoka while wearing a Korean uniform.

Shooting also was a top contributor to Korea’s haul, providing six golds, three silvers and four bronzes. Park Dae-hun was the top performer, winning the men’s 50-meter pistol in both the individual and team events, and taking another gold in the men’s 10-meter air pistol team event.

Korea showed why it is the world’s No. 1 in archery after winning eight of the 10 events in this year’s Universiade. The only two where Korea failed to win gold medals were the women’s team competitions in recurve and compound. The team also bagged four silvers and two bronzes.

Male archers Lee Seung-yun in recurve and Kim Jong-ho in compound were triple gold medal winners, and the 2012 London Olympic gold medalist Ki Bo-bae collected two gold medals and a world record in the preliminary round.

She shot 686 points out of a possible 720 on July 4, beating the previous record set by Park Sung-hyun in 2004 by four points. The women’s team, Ki, Kang Chae-young and Cho Mi-sun, also combined for a group world record of 2,038 points, topping the record set by Korea at the 2014 Archery World Cup by six points.

In golf, Lee Jeong-eun took the women’s individual and team events, an echo of Korea’s dominance on the LPGA Tour, while tennis star Chung Hyeon also maintained his reputation by winning the men’s singles and team events. Rhythmic gymnast Son Yeon-jae sparkled over the weekend as she claimed three gold medals by winning the individual all-around on Sunday, before topping the individual hoop and ball event on Monday. The 21-year-old, the first Korean rhythmic gymnast to win a gold medal at a Universiade, also bagged two silver medals in clubs and in ribbons.

Though he didn’t win a medal, Kim Kuk-young can leave Gwangju with his head high after setting a new Korean record in the men’s 100-meter sprint on Thursday. The 24-year-old clocked 10.16 seconds in the semifinals, beating his own five-year-old national record by 0.07 seconds.

The withdrawal of the gymnast Yang Hak-seon was probably the most disappointing and shocking news of the event for Koreans; the 2012 London Olympic vault gold medalist and defending champion at the Universiade had to leave the floor after a hamstring injury.

Yang, nicknamed the “god of vault,” is a native of Gwangju and one of the two torch bearers at the opening ceremony, but the two-time World Artistic Gymnastics champion couldn’t even show off his vault performance after being dropped on July 5. Medical staff advised him that further competition would aggravate his injury. Without Yang, Korean artistic gymnasts finished the Universiade with only one silver and one bronze medal.

While Korean judo athletes shined at this Universiade, the 2008 Beijing Olympic silver medalist judoka Wang Ki-chun shed a sad tear after failing to take the men’s under-81 kg title on July 5. The 26-year-old was also looking for a fresh start here after moving up from the 73 kg to 81 kg category in late 2013. He was seeking his third Universiade gold medal after victories in the 73 kg division in 2009 and 2011.

The 2008 Olympic gold medalist Lee Yong-dae did get one gold in the men’s badminton team event, but failed to defend his Universiade title in men’s doubles with Ko Sung-hyun. Since badminton events were all held in his hometown, Hwasun County, South Jeolla, and it was his last Universiade, Lee had high expectations, but slipped in the quarterfinals. However, Korea won all six gold medals in badminton.

Korea collected eight gold medals, four silver and three bronze in taekwondo to uphold its “home sport” advantage. But five out of the eight golds were in poomsae events, which are judged on basic patterns and forms of taekwondo attacking and defense movements.

In team-only sports, Korea was shut out of gold, coming close only in handball and in men’s football. The football squad was hopeful about collecting its first Universade gold in 24 years, but lost 3-0 to Italy on Monday. The women’s team finished seventh.

The baseball team lost to Chinese Taipei in the semifinals and settled for bronze after beating the United States, and the women’s handball team collected a silver medal after falling to Russia in the final. The men’s handball team placed fourth.

The men’s basketball team finished 11th, while the women ended in 14th place. Both the men’s and women’s volleyball teams failed to advance past the group stage.