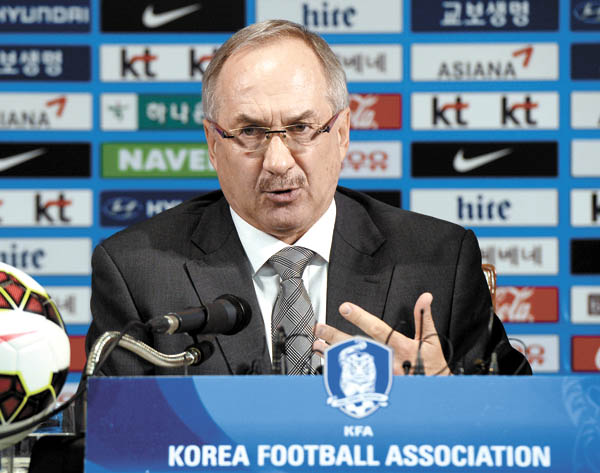 Korea national football team coach Ulrich Stielike has announced his youngest squad yet for the EAFF East Asian Cup, as Ulsan Hyundai striker Kim Shin-wook joins the national team for the first time since the 2014 FIFA World Cup in Brazil.

At the Korea Football Association (KFA) headquarters in Seoul on Monday, Stielike unveiled his 23-man roster for the East Asian Cup, which takes place next month in Wuhan, China. South Korea will starts its tourney with host China on Aug. 2 before taking on archrival Japan on Aug. 5 and North Korea on Aug. 9.

Since the event is organized by the East Asian Football Federation (EAFF) rather than the International Federation of Association Football (FIFA), football clubs are not obligated to send their players to the national team. Therefore, it was widely expected that Stielike would form the squad solely with players based in East Asia.

In the 23-man squad, 18 were born in 1990 or later, making it the youngest team since Stielike took the job last September. The average age of the squad is 24.3, with the oldest player being goalkeeper Kim Jin-hyeon, 28. 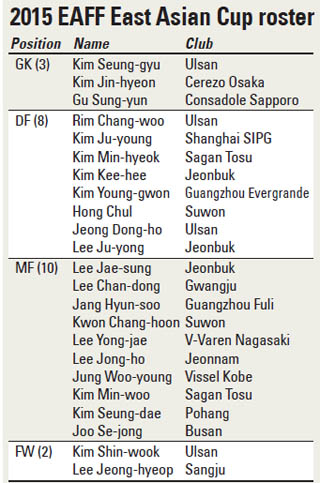 “It is true we have some holes because of the absence of some players, but this doesn’t mean that the competitiveness of the national team has gone down,” Stielike said. “If we can mix players’ willpower, cohesion and techniques, we can still be the best team. Although they are young and inexperienced, we will show a top performance in the tournament.”

Goalkeeper Gu Sung-yun of Consadole Sapporo and Lee Chan-dong of Gwangju FC were selected for the national team for the first time in their career, while five other players - Rim Chang-woo, Kim Min-hyeok, Lee Jong-ho, Kim Seung-dae and Kwon Chang-hoon - had been previously picked for the team but had never played an international match.

Guangzhou Evergrande defender Kim Young-gwon is the most experienced player on the squad, playing 35 international matches.

Kim currently has eight goals in 22 matches in the K-League Classic. On the national team, he has scored three times in 29 matches.

“We’ve watched him closely lately and his fitness level wasn’t a concern,” said the 60-year-old German.

Along with Kim, Sangju Sangmu striker Lee Jeong-hyeop was also selected as the forward. However, Joo Min-kyu, who is the leading scorer in the second division K-League Challenge with 16 goals in 20 games, was omitted.

The former Ivory Coast coach hinted that he will experiment with the offensive lineup during the East Asian Cup. Lee Yong-jae, Lee Jong-ho and Kim Seung-dae, who were all classified as forwards in the 50-man preliminary list, have been named as midfielders.

“I have thought about whether we should use fullbacks or forwards for attacking flanks, but I decided to go with the latter,” Stielike said. “The point is whether these players can also perform defensively as well, but I first want to use their attacking ability on flanks.”

The squad will depart for China on July 31.