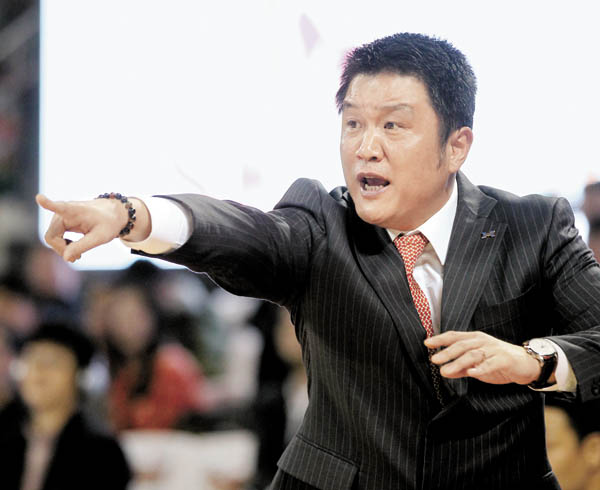 Back when Yoo Do-hoon, coach of the Incheon ET Land Elephants, was a player, he was called “viper.”

With his short hair and sharp-looking eyes, the point guard earned his nickname by displaying tenacious effort on the basketball court, overcoming his 173-centimeter (5-foot-8) height.

Yoo’s characteristic style was enough for him to have an elite career, playing with renowned teams, like Yongsan High School, Yonsei University and the Daejeon Hyundai Gullivers, and winning a lot of trophies, including two Korean Basketball League (KBL) championships, in the process.

After taking up coaching, Yoo continues to exert power; the 48-year-old’s reputation continues to shine. Even the Ulsan Mobis Phoebus coach Yoo Jae-hak, whose nickname is “Mansoo” (“10,000 strategies”), acknowledges the Elephants’ coach as the top strategic thinker in the league.

But there is one thing Yoo Do-hoon doesn’t have as a coach: a KBL championship ring.

Yoo was formerly an assistant coach for the Jeonju KCC Egis and the Changwon LG Sakers. He is now in his sixth season as the Elephants coach, but as of yet hasn’t gotten his team into the championship series.

So he’s spitting his hands and rolling up his sleeves for the new season, which starts on Sept. 12. To try to take its first KBL title, the Elephants have already completed an overseas training stint in Shenyang, China, from July 7 to 11.

“It’s about time for us to really perform well,” Yoo said in China in an interview on July 8 with Ilgan Sports, an affiliate of the Korea JoongAng Daily.

When Yoo first took the Elephants’ helm in November 2009, the team was one of the bottom-dwellers, the six-team playoffs only a dream. But under his guidance, the Elephants have now made it into the playoff for five straight seasons, including a regular-season runner-up finish in the 2010-11 season. Last season, it became the first No. 6-seeded team in the KBL playoffs to sweep a No. 3-seeded team to reach the semifinals.

The steady performance of the Elephants has a lot to do with Yoo’s style of running the team.

He is known for his ability to develop latent talent instead of signing big stars. As a result, the Elephants have been watching their player salaries increase year after year as players blossom. But Yoo says it’s about time he get a return on those hefty paychecks.

“I have been emphasizing the process to players, because a good process leads to good results,” he said. “When low-salary players become well-paid players, I feel some pride, but now it’s time for some results.”

Although Yoo is hard at work, key players like Lee Hyun-ho, Jung Young-sam and Jeong Hyo-geun didn’t join the training camp in China either because of injuries or to compete in the Gwangju Universiade.

Foreign players were also absent; tryouts for the overseas contingent are now being held in Las Vegas. So in Shenyang, Yoo was checking out potential “sixth men” and reserve players. And he was tough on them, shouting and demanding disciplined play.

“I don’t scold them for technical mistakes,” Yoo said. “The reason that I get mad is that sometime players don’t practice the basics. What I want from players is mental toughness, in which they are ready to run one step more than the opponents, and a commitment to give their best effort every time.”

Yoo claims he turns into a “warm gentleman” to his players after practice. He says he knows how players, from stars to sixth men, feel because he was once in all those roles.

“I know more than anyone else what is essential for professional players and what they need to work on more,” he said. “I wasn’t tall, but in order to survive in my position, I studied how to ‘run’ the game, as well as boost my skills in assists and fast breaks. I don’t want to hear someone saying, ‘I’m a bad player because I’m short.’”

If last year is a precedent, the Elephants will probably be ready to rock the court with passion, just like they did in last year’s playoffs - but just for a longer stretch.

“I believe players can do it, because I have done it before,” he said. “I don’t want to win just one championship, but at least two or three.”