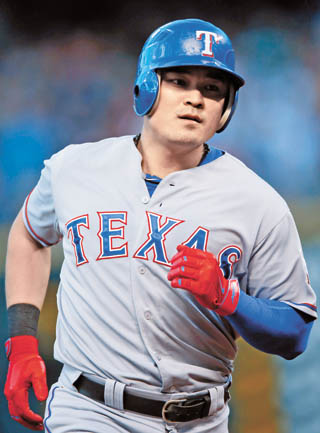 Texas Rangers’ Choo Shin-soo circles the bases after hitting a solo home run off Colorado Rockies starting pitcher Kyle Kendrick in the fourth of their Major League Baseball game on Wednesday (Korean time) in Denver. Choo went on to hit for the cycle as the Rangers won 9-0. [AP/NEWSIS]

Choo’s achievement was also his first hit for the cycle in an 11-year major league career.

At Coors Field in Denver, Choo started as the team’s seventh batter in the lineup and the right fielder, and was 4-for-5 with three RBIs and three runs scored.

The 33-year-old hit a double in the second inning, notched a homer in the fourth and took a single in the fifth before completing the cycle with a triple in the ninth. The lefty batter also stole one base in the fifth. Thanks to his performance, the Rangers won 9-0.

The Busan native inched up his batting average from .226 to .235 after Wednesday’s game. He has 12 home runs and 42 RBIs this season.

Choo is now the eighth player in Rangers history to hit for the cycle in a game and the first since Alex Rios did in 2013. The former Cleveland Indians and Cincinnati Reds player also joins Boston Red Sox “utility man” Brock Holt as the only other player to the hit for the cycle this season.

Choo’s performance marked his exit from a recent slump. Before Wednesday’s game, he wasn’t in the starting lineup for three of the last four games played after the All-Star Game break because opponents’ starters were left-handed pitchers.

Until Monday, Choo was .268 against right-handed pitchers but only .153 against southpaws. On Tuesday against the Rockies, he came into the game as a pinch hitter in the top of eighth, but was struck out in just four pitches. He was later replaced during the bottom of the eighth while playing as right fielder.

But on Wednesday, Choo was hot from the start. In the second inning with a runner on first, Choo hit a double to center against Rockies starter Kyle Kendrick to put his team on the board. He later also scored after Delino DeShields’ hit.

In the fourth, when the Rangers were leading 3-0, Choo shot a solo homer over the right center fence against Kendrick. It was his first home run since July 2 against the Baltimore Orioles.

He continued to fire in the fifth. When runners were on first and third with one out, Choo hit a single from lefty pitcher Yohan Flande to get his third RBI in the game. He later stole second base, which was his second steal of the season.

Choo seemed to cool down in the seventh as he grounded out to shortstop. However, in his final at bat in the ninth, he completed the cycle from the Rockies’ lefty pitcher Rex Brothers with a triple to center.

Meanwhile, Pittsburgh Pirates shortstop Kang Jung-ho was 2 for 4 against the Kansas City Royals at Kaufmann Stadium in Kansas City on Wednesday to extend his hitting streak to eight games. The 28-year-old is now hitting .282. The Pirates lost 1-3.