After 700 matches, goalie still fired up

After 700 matches, goalie still fired up 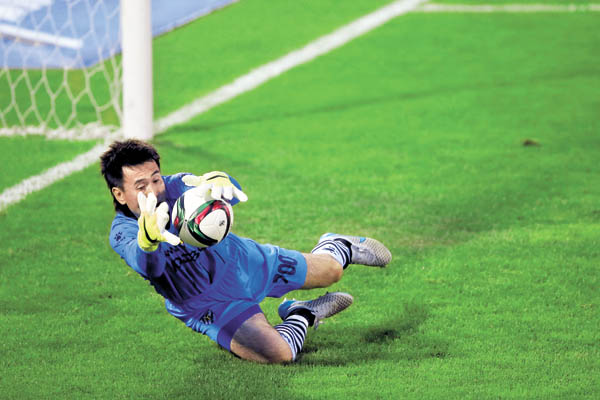 Jeonnam Dragons goalkeeper Kim Byung-ji blocks a shot during a game against Jeju United on Sunday in Gwangyang, South Jeolla. Provided by the K-League

On Sunday at Gwangyang Football Stadium, Jeonnam Dragons goalkeeper Kim Byung-ji wore a jersey with an unusual marker - No. 700.

That’s because the 45-year-old was celebrating his 700th match in the K-League. With his wife and three sons watching from the stands, Kim played with the abandon of a 20-year-old, not hesitating to use his body to block Jeju United players’ shots.

Kim, the league’s oldest active player, started playing football when he was a third grader at Miryang Elementary School, but wasn’t a prospective player in his youth. Without an elementary school career that drew attention, he wasn’t able to make it into a good high school or college known for football.

After graduating from high school, Kim worked at Goldstar Industrial Systems in Changwon, South Gyeongsang, and played on an employee team, but he didn’t give up on becoming a professional footballer.

He did his military duty with the Korea Armed Forces Athletic Corps, and turned pro in July 1992 with Ulsan Hyundai FC, where he was an apprentice earning 800,000 won ($1,014 at the 1992 exchange rate). But just two months later, he made his professional debut as a goalkeeper and has been a K-League fixture since then.

Q. How would you rate your 24-year professional career?

A. I have been an entertaining goalkeeper. Back when I was in my 20s, I dyed my hair and liked adventurous play. There were critics who complained that I was too aggressive, but sometimes, I delivered excitement and joy to fans. Looking back, I think I scored 80 out of 100.

Did you know you were going to play this long?

Never. When I made my pro debut, I saw Choi Kang-hee (now Jeonbuk’s coach) retiring at the age of 34, so I was thinking I should retire at 32 or 34. But because I took care of myself, I was able to play for 11 more years.

You took other jobs in order to play football.

Because my family wasn’t wealthy, I had to make money. I once worked for an elevator company’s inspection team, checking wire ropes and pulleys. I worked in the daytime and exercised at night, and people close to me said I was crazy. But that’s what made me become a professional player.

I was amazed that people could make money by playing football. I got a signing bonus of 10 million won in my first professional contract, and I gave all of that money to my parents.

I just do what professional players should do. I don’t drink or smoke or make personal appointments after 8 p.m. I have a set of 100 things that I should not do and have been obeying that rule. Although I don’t drink or smoke, I relieve stress by sleeping or having a conversation with my wife. In order to become a master in one area, you need to abandon something that other people enjoy. I fought with myself and often thought my biggest enemy was myself.

What do you want to say to fans who are in their 40s like you?

I know that some people even retire in their 40s. I understand that when you are in your 40s, your sons are high school or college students, which means there is some economic pressure, but some people have to quit their jobs against their will. When you think about family though, you can do anything, but you need to fight against yourself and build your competitiveness. I want to deliver hope to fathers in their 40s and emphasize, “You guys can still do it!”

I have come up with a number that people can remember easily. My next goal is to play 777 matches. After I retire, I want to have a job related to football, whether it’s as a coach, agent or administrator. But the final goal of my life is to stay a good father and husband.