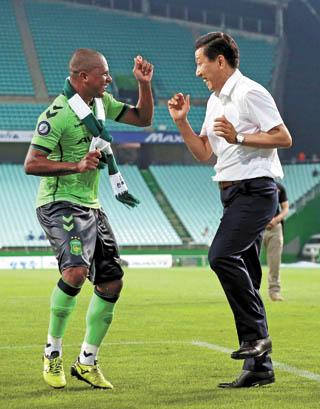 On Sunday, Jeonju World Cup Stadium was rocking as Jeonbuk roared back from an early deficit to beat the Suwon Samsung Bluewings 2-1.

The Jeonbuk Hyundai Motors gave up the first goal to Suwon’s Brazilian forward Santos just 12 minutes after the kickoff, and that was the only scoring until late in the second half. With only 10 minutes left until the final whistle, Jeonbuk was still scoreless, but Luiz Henrique scored the equalizer in the 82nd minute, and Lee Jae-sung notched the game-winning goal five minutes later. The 30,000 fans at the stadium exploded in a sea of green.

The 2-1 victory allowed Jeonbuk to cement its lead in the K-League Classic. The defending champions now have 15 wins, five draws and three losses; they lead No. 2 Suwon by 10 points in the league standings.

Sunday’s victory also gave Jeonbuk’s Choi Kang-hee a new personal record. The 56-year-old coach now has 154 wins (along with 80 draws and 82 losses) as Jeonbuk’s skipper, which is the most wins for any coach with a single team. He pulled ahead of the 153 wins notched by Kim Ho with Suwon from 1996 to 2003.

The K-League Classic will take a break from competition until Aug. 12. Some players will be competing in the EAFF East Asian Cup next week. But the pause seems unlikely to put out the raging fire in North Jeolla.

Not only is Jeonbuk cruising through its league schedule, it also has a record 22 matches without a loss, a streak that began late last season.

And fans are responding. The team has drawn an average 15,940 fans to each of this season’s games, second only to FC Seoul and its much larger population base. FC Seoul has attracted 17,092 fans on average to its matches. At the match against Suwon on Sunday, 31,192 fans jammed the stadium.

“As the fans kept chanting for Jeonbuk, we got more and more fired up,” Jeonbuk general manager Lee Chul-keun said with satisfaction.

Jeonbuk’s goal is to extend its fan base not only in the provincial capital of Jeonju, but all over North Jeolla province. The team’s green colors echo the province’s emphasis on that color in its designs and tourism advertising.

In 2000, Hyundai Motor wanted to change the colors of the team from green to white and blue when it bought the club. But Jeonbuk supporters rose in protest, and the idea was quickly dropped.

In 2012, Jeonbuk changed the design of its emblem to appeal more directly to its fans. The earlier logo emphasized the word “Motors,” but now the word “Jeonbuk” is more prominent.

“We want to emphasize that the owner of the club is not the company, but the people of Jeonju and North Jeolla,” Lee said. “For 10 years, coaches and players have visited restaurants in the region and signed autographs to get closer to the fans. I think those kinds of efforts are starting to pay off.”

But Jeonbuk is not satisfied yet. Lee said the team’s goal is to draw an average of 20,000 paying fans per match. It already hits that mark for weekend matches there, but Wednesday evening contests are more lightly attended.

“Whether the team wins or loses and whether the opponent is a strong or a weak team, we need to build a culture where fans visit the stadium regularly to support the team,” he said. “Although we won’t be like Europe, where football has been played for more than a century, any time soon, we need to keep trying.”

But Jeonbuk knows that good performance and the presence of star players will bring more fans to stadium.

The K-League Classic has been hit recently by an exodus of stars to China and the Middle East. Jeonbuk’s Brazilian striker Eduardo Goncalves de Oliveira (better known as Edu) left for the Chinese second-division team Hebei China Fortune FC after receiving a lucrative contract. Despite his defection, Edu, 33, is still the K-League’s top scorer, with 11 goals.

The team also said goodbye to Brazilian attacking midfielder Enio Oliveira Junior (Eninho) after the 34-year-old decided to terminate his contract with the team for personal reasons.

Vera, 28, had 17 goals in 38 matches with the Spanish second division team Mirandes last season, while Luiz Henrique returns to Jeonbuk after playing four seasons with the team from 2008 to 2012.

The highlight of the team’s reinforcement was the signing of Lee Keun-ho, on loan from the Qatari club El Jaish SC. The 30-year-old will play for Jeonbuk for only six months, but that still was seen with envy by other coaches.

“Jeonbuk will be a more formidable team in the second half,” said a K-League coach who asked not to be named. “It is good thing for the league, but for opponents, it’s going to be tough to face Jeonbuk.”

In the domestic league, Jeonbuk is trying to become the second club in K-League history to win the title two years running. Seongnam Ilhwa Chunma (now Seongnam FC) took three championships in a row from 2001 to 2003, and no team since then has repeated as champs.

Jeonbuk has a shot, it seems. Although it has three losses, the team has been cementing its image as a scrappy bunch that never gives up. The match against Suwon on Sunday was a good example.

“It was a match that showed the ‘power of Jeonbuk,’” Jeonbuk coach Choi Kang-hee said on Sunday. “We could have been shaken after giving up the first goal, but the players showed their confidence and commitment to getting a victory.”

For K-League Classic teams, scoring the first goal means little playing against Jeonbuk. In eight matches in which the team allowed its opponents the first goal, Jeonbuk has collected 16 points with a record of five wins, a draw and two losses. That’s the best record among K-League clubs this season. In the 13 matches where it scored first, Jeonbuk had 10 wins, two draws and one loss.

“As the leading team in the K-League, I want us to play a league match with more than 40,000 fans watching at the stadium,” Choi said.