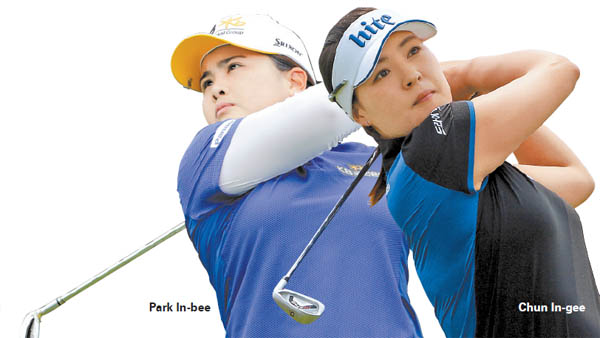 The Ricoh British Women’s Open, which starts on Thursday at Trump Turnberry Resort in Scotland with 144 golfers, means lot for Korean golfers.

If a Korean woman wins the season’s fourth major tournament, which is sanctioned by both the LPGA Tour and Ladies European Tour (LET), she will set a new combined record for Korean golfers’ wins in single season on the LPGA Tour. So far, the cup count stands at 11 on the U.S. tour this season, matching their records from 2006 and 2009.

But among the 21 Koreans at Turnberry, Park In-bee and Chun In-gee both have an additional laurel at stake; for them, winning the British Women’s Open would be more than adding another major title to their records. Park is three-fifths of the way to a career grand slam; Chun is looking for a major championship on four different tours.

The No. 1-ranked Park is gunning for Korea’s first grand slam. The 27-year-old has so far won the Women’s PGA Championship (in 2013, 2014 and 2015), the U.S. Women’s Open (in 2008 and 2013) and the ANA Inspiration (in 2013). If she captures the British Women’s Open this week and the Evian Masters in September, Park will be the first player to claim the modern-day career grand slam of the five LPGA major tournaments.

Only six LPGA golfers have a career grand slam, all when only four tournament victories were required. They are Pat Bradley, Juli Inkster, Annika Sorenstam, Louise Suggs, Karrie Webb and Mickey Wright. They each have cups from the Kraft Nabisco Championship (now the ANA Inspiration), the U.S. Women’s Open, the LPGA Championship and the Women’s British Open.

The Evian Championship, a French tournament, became an LPGA major in 2013. Park won it in 2012, when it was the pre-major Evian Masters.

Before last year’s British Women’s Open, Park took a week off before competing, but this year, she decided that a tune-up was in order.

“In golf, I think your game isn’t badly affected even if you are a bit tired,” said Park, who has three wins this season and is the current prize money leader on the LPGA Tour. “I thought testing my shots and putts up to the last moment was important.”

At last week’s Meijer LPGA Classic, Park was tied for 10th until the third round, but swooned to finish 44th after carding a 5-over 76 in the final round.

“Golf is a strange sport,” she said. “If you are good at one thing, then another thing gets difficult. Throughout the season, I couldn’t putt well but hit good fairway shots, but now it’s opposite. I won’t think too seriously about this because you experience this kind of thing often.”

Despite her 15 LPGA Tour wins, she hasn’t won the British Open yet, but she has come close, especially in 2012 when she was the runner-up.

In 2013, she was chasing a calendar-year grand slam and had the first three legs completed. But the pressure got to her and she finished 42nd. Last year, she blew a one-stroke lead going into the final round to finish fourth.

“The British Women’s Open is not an event that you can win with skill alone,” she said. “You need some luck with the tee times and a strong mentality that doesn’t get shaken by rain or wind. Since I studied hard the past two years, I don’t feel a lot of pressure this year.”

Park will tee off in the first round with world No. 3 Stacy Lewis and Spain’s Azahara Munoz. Lewis is the 2013 champion at this tournament; that was her last major victory.

While Park is chasing a career grand slam, Chun In-gee is targeting wins at major tournaments on four different professional golf tours in a single season. No Korean has ever accomplished that feat either, and the joint accreditation of the British Women’s Open gives her a shot at an LET major.

Ranked No. 9 in the world, Chun is the prize money leader on the KLPGA Tour, with four wins. She took the World Ladies Salonpas Cup in Japan in May before she stunned the field by winning the U.S. Women’s Open on July 12 in her first attempt. Last week, the 20-year-old claimed the Korean LPGA Tour’s Hite Jinro Championship, and this week, she is looking for a European major to add to her trophy case.

Chun will have to overcome a long flight and tight tour schedule. At the BMW Ladies Championship here, in which she played just three days after returning from the U.S. Women’s Open, she had to withdraw in the final round due to fatigue.

Giggling and laughing with pleasure about her experiences at the U.S. Women’s Open, Chun says she is also looking forward to just being in Turnberry.

“I don’t care about setting a record,” she said. “It’s just an honor for me to play in the place where golf was born. Since everything is a new experience for me, my goal is to enjoy as much as I can.”

Chun is paired with Hall of Fame golfer Karrie Webb, who won the tournament in 2002, and English golfer Georgia Hall.

Other Korean women will also be trying to claim a chunk of the $3 million prize money. World No. 4 and LPGA Tour rookie Kim Hyo-joo, who already has one win this season, will play with Taiwan’s Teresa Lu and American golfer Lizette Salas.

World No. 5 Ryu So-yeon, the 2011 U.S. Women’s Open Champion, is paired with China’s Feng Shanshan and Sweden’s Anna Nordqvist. LPGA Rookie of the Year contender Kim Sei-young, who has bagged two wins this season, will play with Sarah Kemp and Anne-Lise Caudal.

As always, world No. 2 Lydia Ko is considered the top contender to rain on the Koreans’ parade, even though she has strong ties to this country. The Korean-born New Zealander, 18, is looking for her first major title and hopes to break Morgan Pressel’s record as the youngest champion of a major tournament.

For extra motivation, Ko could retake the world’s No. 1 ranking this week if she turns in the lowest score and Park cooperates by finishing 21st or lower. Ko is paired in the first round with Brittany Lincicome, who won this year’s first major, the ANA Inspiration, and Japan’s Mika Miyazato.

JTBC Golf will air the first round live tonight at 9 p.m.