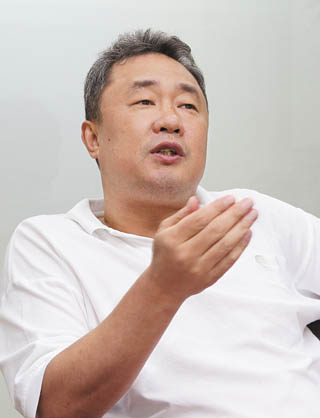 Jeon Chang-jin during an interview at his lawyer’s office in Seoul on Wednesday. [Ilgan Sports]

Anyang KGC Coach Jeon Chang-jin, who has been investigated by the police for alleged match-fixing and gambling, says he will probably never return to the basketball court even if he is proven not guilty.

In an exclusive interview on Wednesday with Ilgan Sports, an affiliate of the Korea JoongAng Daily, Jeon said his 40-year basketball career has now collapsed because of the scandal. Since May, the five-time Korean Basketball League coach of the year has been the target of a Seoul police investigation for allegedly throwing three games as coach of the Busan KT Sonicboom last season.

“People already recognize me as a person who did that,” he said. “I am now a gossip magnet. I can’t even walk the street and meet people. How can I return to the basketball court in this kind of a situation?”

Jeon has been in seclusion since the police investigation was first reported on May 25, and this interview was his first since then. He has been questioned twice by the police, who last week asked that he be detained as they continue assembling evidence that he violated the National Sports Promotion Act. The request was rejected by the prosecutors, who said Jeon is neither a flight risk nor in a position to destroy evidence, the two grounds for detaining a suspect.

Prosecutors will ultimately decide whether or not to indict him.

According to the police, Jeon threw three games last season by using bench players in the second half to a greater extent than usual. Jeon responded that his team, the Sonicboom, had several inexperienced young players at the time who needed game experience to help them develop.

“The police said they analyzed the games with experts, but who knows the team’s situation better than I?” he asked. “Did they really analyze which players were injured and how the team should develop young players? If I really planned to fix a match, why did I chase the opponents and play a neck-and-neck game instead of losing comfortably by 20 points in the fourth quarter?”

There were also raised eyebrows when police said Jeon had borrowed 300 million won ($256,270) from a private lender and used a cloned cell phone to talk with two friends who placed bets against Jeon’s team on an illegal gambling website. The two men, who have not been identified, are in custody.

Jeon claims that he borrowed the 300 million because one of the men said he needed money urgently for his business. The coach said he didn’t know that money would be used for illegal gambling.

“I’m a man who lends money to people close to me,” he said. “Many times, I haven’t been able to get the money back.”

Jeon insisted that the matter of the cloned phone was a misunderstanding. The police said that from Feb. 6 to March 1, he used the phone to instruct them to place bets.

“When I was summoned by the police the second time, I knew some things that I didn’t know about before,” he said. “I also realized why the police had doubts about me.”

Jeon said he was hospitalized on Feb. 3 after a heart attack, but he told the Sonicboom he was going to the hospital for fatigue from overwork. But when the media found out the truth, his cell phone kept ringing. To avoid reporters, he asked one of the detained men to get him a different phone, but didn’t know it was cloned. “I didn’t want my mother to be concerned about my health and that’s why I lied about why I was hospitalized,” he said.

Jeon apologized for the scandal and to the Seoul SK Knights coach, Moon Kyung-eun. The police said they were also considering an investigation of Moon after Jeon talked with the coach on the phone a day before the alleged match fixing took place.

“I’m very sorry for him because he is getting into trouble because of me,” Jeon said. “I consulted with him privately for 30 minutes, but because things turned out this way, I have nothing more to say. If that’s a problem, shouldn’t the police investigate people I had dinner or drinks with?”

He said, though, he especially regrets the trouble for Anyang KGC.

“It’s a team I will never forget. That’s why I want to help this team if I can,” he said.