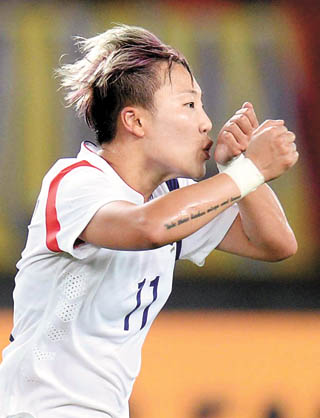 Before the EAFF East Asian Cup kicked off in Wuhan, China, some were concerned about the offensive capabilities of the women’s national team.

Some of top players were out with injury, and others weren’t allowed to play in the tournament by their clubs.

But forward Jung Seol-bin shattered the concerns with a canon-like shot to score Saturday, leading the team to top host China 1-0.

Jung scored the match’s only goal in the 27th minute, from outside the penalty box after midfielder Kang Yu-mi stole from a defender, to deliver the team’s first victory this cup.

This was Jung’s 12th goal for South Korea. It was also her first goal in 10 months, since she scored against Vietnam at the Incheon Asian Games.

“Coach told me to shoot when you are in the shooting zone,” she said. “I had that idea in my mind and had good feeling when I took the shot.”

Jung, who plays with Incheon Hyundai Steel Red Angels, first donned the national team uniform in 2006 and played in major tournaments like the 2008 and 2012 Summer Olympics, as well as the 2010 Asian Cup.

However, she wasn’t really a star on the national squad, overshadowed by players like Ji So-yun and Park Eun-sun. In the 2015 FIFA Women’s World Cup in Canada, where South Korea reached the knockout stage for the first time, she was on the bench.

“There’s always been pressure,” she said. “I dreamed about scoring, but I came up short before.”

But Ji and Park couldn’t travel to China due to injuries or club issues, which allowed Jung to take center stage.

South Korea was thought to be in a tough position for the match because veteran midfielders Cho So-hyun, Jeon Ga-eul and Kwon Hah-nul weren’t feeling well and wouldn’t start.

The hot weather was also challenging for the team. Despite a 9 p.m. kickoff, it was still 32 degrees Celsius with 72 percent humidity when the players took the field.

“We were warming up before the match, but the weather was so sticky and hot that we wondered whether or not it was actually evening,” she said. “But we just thought of it as another part of the game and managed to hold onto the win.”

Jung said she wants revenge against North Korea, which defeated the national team 2-1 in the Asian Games last year.

“Japan brought young players, so that puts more pressure on us,” she said. “We met North Korea for the first time since the Asian Games, but we had no chance for revenge until now. I want to have good performance.”

Meanwhile, South Korea is likely to lose defender Shim Seo-yeon for the rest of the tournament due to injury. The 26-year-old, who played defensive midfielder in match against China, left the pitch in the 53rd minute after injuring her right knee while trying to steal the ball.

The Korea Football Association said seriousness of her injury will be come out after she conducts the MRI test today.