Both sides come together off the park

Both sides come together off the park 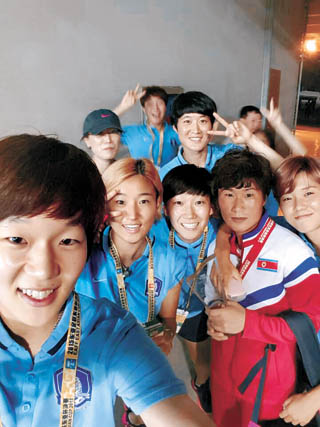 The South Korean women’s team now has one win, one draw and 14 losses against the North. The South hasn’t won a match since 2005.

Saturday’s match was important for the Taegeuk Ladies because a victory would have been the team’s first East Asian Cup trophy since 2005. Both teams fought hard on the pitch, but in the end, there was a peaceful defeat for South Korea.

North Korean captain and forward Ra Un-sim scored her team’s second goal against the South to cement the team’s route to the trophy. During the award ceremony, Ra - who is also the top scorer in this year’s East Asian Cup, with three goals - was busy in conversation with South Korean captain and midfielder Cho So-hyun.

Both players were born in 1988 and have known each other through various international tournaments.

Before the East Asian Cup, Ra told reporters, “I want to meet her. As the same people and ethnic group, if we are unified, we can play on the same pitch.”

After the game, other players of the same age mingled with the two captains. Some South Koreans had their hair dyed yellow, while some North players had “unfashionable” short hair.

“Wow, you really are staying longer [with the team],” Ra told her.

For the East Asian Cup, the two Korean teams stayed at the same hotel but didn’t meet each other often. The political situation still seemed to hang over the event.

“The match against the North can be linked politically, so we are always careful of our behavior,” said South Korean forward Jung Seol-bin.

For South Korean players, there was mixed feeling when facing the North Koreans. “I wonder how they live in their country,” Cho said. “Sometimes, I wonder what would happen if they lose a match.”

Both Korean teams left China on Sunday. However, they are scheduled to meet again for the 2016 Summer Olympics Asian qualifiers in Osaka, Japan, next February. While the team will be glad to meet their North Korean friends again, Cho said they will seek revenge next time.

“We are narrowing the gap against the North,” she said. “I think we can win at the Olympic qualifiers.”