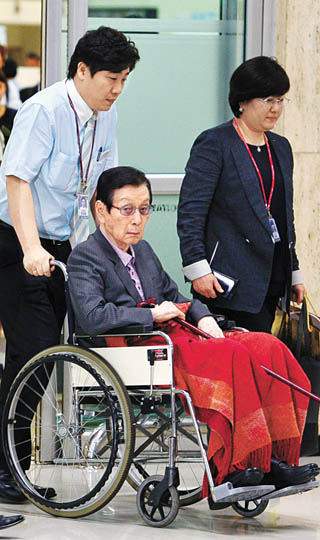 The public battle between Shin Dong-joo, the eldest son of the Lotte Group founder, and his younger brother, Shin Dong-bin, is expected to climax later this month, according to sources with knowledge of the matter.

Shin Dong-joo is said to be working on increasing his stake in Lotte Holdings to 3 percent, probably in a bid to request a shareholder meeting and oust his younger brother.

Under Japanese regulations, a shareholder with a 3 percent stake or higher can request a general shareholders meeting. Shin Dong-joo is known to control a stake just short of 2 percent.

The older son is likely to request shareholders fire five other top executives, including his younger brother’s loyalist Takayuki Tsukuda, the CEO of Japan’s Lotte operations. The brothers’ stakes in Lotte Holdings are said to be around the same size.

Shin Dong-joo was quoted during an interview with Nihon Keizai in the last week of July: “My stake is just short of 2 percent. But including 32 percent treasury shares and a stake owned by Kojyunsya [a major shareholder of Lotte Holdings headed by his father], my voting rights will easily top two-thirds of the total.”

Lotte has declined to elaborate on how many allies each brother has gathered, but contends that the younger Shin has gained the support of something like a 65 percent stake in Lotte Holdings, when including treasury shares and stock owned by senior executives and minority shareholders.

If Shin Dong-bin fails to build up allies, he may not respond to his brother’s request for a general shareholders meeting, industry insiders say.

“If the board refuses [Shin Dong-joo’s] set of requests, there are possibilities that he may bring his case to court,” said a Lotte Group official.

To tighten his grip on the retail-to-hospitality group, Shin Dong-bin has named himself co-CEO of Lotte Holdings and head of L Investment, an obscure Lotte unit that holds a major shares in key Lotte affiliates.

Japan’s Lotte Holdings acts as the holding company of Lotte’s Japanese operations and also controls 19.07 percent of Hotel Lotte, one of the key units of the group’s Korean operations.

Another possible outcome from the shareholders meeting, if it takes place, is the creation of a new honorary chairman position for Shin Kyuk-ho, the founder and patriarch.

The appointment of founder Shin as honorary chairman would mean his retirement from the group’s management and a loss for elder son Shin Dong-joo, who leans on him for support, insiders say.

But even if the younger Shin fails to put his father in the honorary chairman position, he will have little trouble managing the companies on a daily basis, since his father has already been forced out of Lotte Holdings.

Six out of seven board members at Lotte Holdings are said to be siding with the younger Shin.

Tensions arose when Shin Dong-joo started building up shares in key Lotte affiliates in Korea in 2013.

Sales of the operations in Korea are far higher than those in Japan. In 2013, for example, Lotte Group affiliates reported combined revenues of 83 trillion won ($71 billion), making it the fifth largest group in Korea. In contrast, Japan’s Lotte Group had just 5.7 trillion won in sales the same year.

Despite the discrepancy, Japan’s Lotte Holdings is at the top of Lotte’s complex cross-shareholding structure.

Meanwhile, patriarch Shin Kyuk-ho is said to be taking Alzheimer’s medication, according to local media reports.

When asked by the Joongang Ilbo, an affiliate of the Korea JoongAng Daily, senior Lotte executive Lee Byung-hui said there were many medications that the Lotte founder is currently taking due to his age, but he was not sure if any of those were for debilitating neurological illness.