Vice premier was executed in North

Vice premier was executed in North 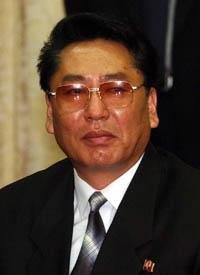 “Choe was executed by firing squad because he complained about Kim’s policy of forestation,” a South Korean source told the JoongAng Ilbo, asking for anonymity.

The National Intelligence Service told the JoongAng Ilbo on Wednesday that it cannot confirm the fate of the North Korean vice premier. It, however, did not deny the information.

“Choe appeared to have been executed around the same time when Gen. Hyon Yong-chol was executed,” an intelligence source said. Hyon, who served as defense minister in the Kim regime, was removed from his post and executed on April 30, 2015.

Choe’s execution appeared to be the latest in a series of high-profile executions by the North’s young ruler. Kim executed his powerful uncle Jang Song-thaek in December 2013 and continued to purge other top military and government officials.

Choe was an economic policymaker who had worked on various economic cooperation projects between the two Koreas. He was the North Korean head of the Inter-Korean Economic Cooperation Committee for the Kaesong Industrial Complex in 2005.

In the same year, he attended three ministerial talks with the South as the chief negotiator for the North. The talks took place in Seoul, Pyongyang and Jeju in 2005.

“He is a typical technocrat,” said Kim Yong-hyun, professor of North Korea studies at Dongguk University. “He is not a key member of the Kim Jong-un’s power circle, but he performed an important role in economic projects.”

After graduating from the Kim Chaek University of Technology, Choe started his career at a cement factory in Sunchon, South Pyongan Province. Since 1998, he served as the deputy head of the Ministry of Construction and Building Materials Industry.

He was appointed to the vice premier post in June last year. He disappeared from public view in late October.