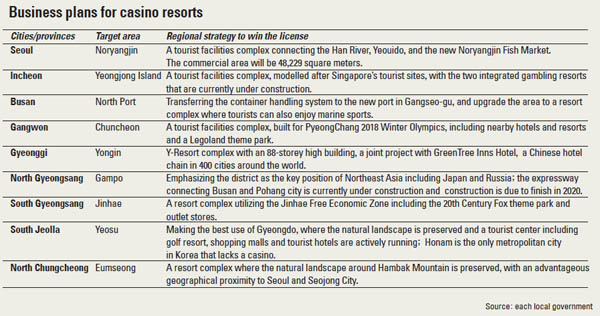 Competition is heating up among local governments who hope to hit the jackpot with a state-led resort complex - part of a move to boost local economies with casinos and other lucrative leisure
facilities.

Thirty-four companies from nine cities and provinces are competing for one of two resort business licenses from the central government .

The Ministry of Culture, Sports and Tourism is slated to announce the preliminary screening results of the Request for Comments (RFC) which were to be submitted by 34 companies by the end of this month.

The two successful businesses will be selected at the end of this year, while the August selection is to narrow the field and identify adequate sites for a resort complex.

“We will focus on two things: whether the area could be developed into the region’s flagship tourist spot reflecting the region’s uniqueness, and if enough investments are available to meet the complex’s scheduled opening in 2020,” said an official from the Tourism Ministry. “We will announce our evaluation on each candidate company’s suitability in opening a casino.”

To prepare for the bid, Dongjak District Office is relocating from the Noryangjin Fish Market, southwestern Seoul, to a new eight-story building nearby in October.

The district office has submitted a resort complex business plan to the central government and is waiting for approval.

The city government plans to develop the North Port into a mecca for marine sport tourism where cruise ships and yachts come in and out. The Busan government is bidding for a resort complex which includes an opera house and a casino.

Korea is taking aggressive measures to expand its tourism business after Singapore had huge success in the resort complex businesses. Japan and the Philippines are also investing in complexes to lure foreign tourists.

Following Singapore’s success, the Korean government made a plan to build two more resort complexes after discussions at the Tourism Promotion and Expansion Conference in 2013 to promote the Korean tourism industry.

Dongjak District Office, which is considered one of the leading candidates, has joined with the National Federation of Fisheries Cooperatives (Suhyup) and the owner and operator of the Noryangjin Fishery Market, to build a 52-story complex at the current fish market site, occupying nearly 48,223 square meters (11.4 acres).

“We will introduce foreign tourists to an ocean-themed, unique experience at the new resort complex,” said Cho Nam-sung, head of the city planning division at Dongjak District Office.

“I think this will become another must-visit place for visitors to Seoul.”

Busan has cooperated with Lotte Group and Genting Group, a leading resort complex operator in Malaysia, to transform North Port into a special tourist zone.

Incheon Metropolitan City already has two resort complexes, Paradise City and LOCZ Korea, on Yeongjong Island, and hopes to further develop the city into a major tourism district by integrating it with the Incheon Free Economic Zone (IFEZ).

“Concentrated investing in one tourist facility is better than splitting up tourists and distracting them to different areas,” said Lee Woo-hyung, director of the tourism and culture department of IFEZ.

Industry analysts say Korea needs to develop the complexes to reflect
the uniqueness of each region to compete with Japan in the international tourist market, already dominated by Singapore.

“It is not easy for a resort complex to succeed when it is solely relying on the gambling business,” said Seo Won-seok, a hotel and tourism management professor at Kyung Hee University.

“The ministry should nominate a proposal, which highlights Korea’s unique geographical features in order to succeed in the international tourist market.”