Consuming more instant noodles per capita than any other country in the world, Korea has seen many unique noodle products come and go. The latest craze is thicker noodles with a salty black soybean paste, known as jajangmyeon.

The trend began with food maker Nongshim’s Jjawang, whose 3-millimeter-wide (0.1-inch-wide) noodles are twice the thickness of other instant jajangmyeon products.

“Thicker noodles can give richer tastes, something similar to hand-pulled ones,” said a representative of Nongshim. “This is why people are looking for thicker noodles.” 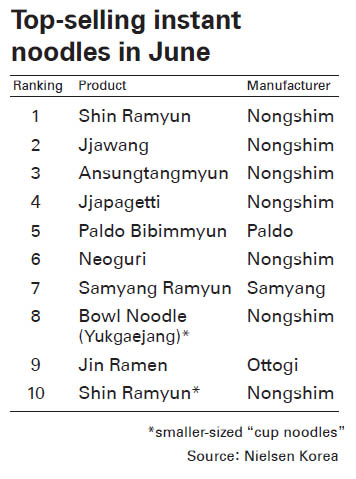 After Jjawang launched in April, it quickly became one of the most popular products on the instant noodle market.

Jjawang was the second-highest-selling instant noodle product in May and June. Nongshim’s Shin Ramyun took the No. 1 position as the perennial top seller.

Since instant jajangmyeon products are usually less popular than their spicy ramen counterparts, the achievement was striking - and it led other companies to jump on the thick noodle bandwagon.

Jin Jjajang has 3-millimeter-wide noodles, along with beef-flavored powder, onion, cabbage and potatoes.

Ottogi said that Jinjjajang comes with a liquid black bean sauce rather than a powder, which it claims delivers a more authentic taste.

“We used the liquid-type sauce to stay true to the original flavor of the vegetables,” said Choi Yong-min, head of the marketing division at Paldo.

Consumers’ changing tastes are leading to big shifts in the noodle industry, with black bean noodles gaining fast on their spicier and thinner ramen counterparts.

The market size of instant jajangmyeon jumped 12.5 percent to 93.8 billion won during the first half of this year, compared to the same period last year.

Still, it’s unclear whether instant jajangmyeon is here to stay, or whether it’s just another flash in the pan like so many other noodle trends.

Last year, noodles with a spicy, red-pepper broth with reduced sodium were hugely popular, but now they’re hard to even find in stores.

Before that, noodles with a white, chicken-based broth were all the rage. From 2011 to 2012, products like Paldo’s Kokomen and Samyang Foods’ Nagasaki Champong were among the top five instant noodles.

In 2011, they took at least 15 percent of the instant noodle market.

Last year, they accounted for less than 10 percent.