Record-setting racewalker next heading to Rio

Record-setting racewalker next heading to Rio 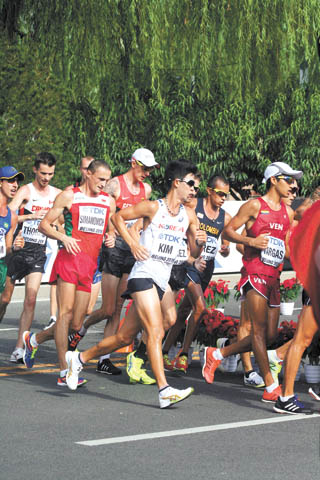 Kim Hyun-sub, center, competes in the men’s 20-kilometer race walk at the World Athletics Championships in Beijing on Sunday. Kim finished 10th at 1 hour 21 minutes 40 seconds.Provided by the team

In Beijing, Kim clocked 1 hour 21 minutes 40 seconds in the men’s 20-kilometer race walk, which ran around the streets around Beijing National Stadium. His time was 2 minutes 27 seconds behind his personal best, which he set last year at the Asian Race Walking Championship.

Kim, who is with the Samsung Electronics track and field team, finished sixth in the 2011 Worlds in Daegu and 10th in the 2013 Worlds in Moscow.

Before Kim, Korea saw high jumper Lee Jin-taek making top-10 finishes in two consecutive Worlds. Lee, who is the Korean record holder in high jump at 2.34 meters, finished eighth in 1997 in Athens and sixth in 1999 at the Worlds in Seville, Spain.

Though he didn’t get a medal or set a personal record, Kim raised his arms high after crossing the finish line, celebrating his finish.

“I raised my arms up because I finished in the top 10,” he told reporters after the race. “But what’s important is when I can get the medal, which many people are expecting from me.”

Before the race, Kim thought the conditions would be good because there was a smattering of rain and cooler-than-expected temperatures. But during the race, the hot Beijing weather was bothering him.

“Honestly, after 14 kilometers, I even thought about giving up the race because I was too tired,” he said. “However, as I saw other racers giving up, I realized that I could be inside the top 10 if I could complete the race. So I just endured until the end.”

Kim’s story is a history of race walking in Korea. The 30-year-old first started running when he entered Seorak Middle School in Sokcho, Gangwon. He started as a middle-distance runner, but his times were not impressive.

His coach later asked Kim to quit running and start race walking, which turned out to be a game-changer for him and a new chapter in Korean race walk history.

Kim rose as Korea’s top race walking prospect after winning a bronze medal at the World Junior Athletics Championships in 2004. He then became the first Korean to finish inside 1 hour 20 minutes in the 20-kilometer race in 2007.

Although not many people know about racewalking, Kim said that he hopes his performance will lead to wider promotion of the sport.

“Recently, I coincidently saw kindergarten students asking their teachers about racewalking,” he said. “Previously, teachers would have said, ‘It’s just walking fast,’ but now, they elaborate on the rules. I was surprised and proud.”

But Kim hasn’t had luck in winning a major international event. In the 2008 Beijing Olympics, he finished 23rd, and four years later in London, he came in 17th. In the Asian Games, Kim has won one silver and two bronze medals in the last three editions.

Kim said he plans to compete until at least age 36, or until the 2020 Tokyo Summer Games. But before that, he is eying gold at next year’s Summer Games in Rio de Janeiro.

“Racewalking is now getting known to people, but there aren’t young athletes who are coming up to the global level,” he said.

“Actually, I do have a mind to quit racing after the Summer Games next year, but if I quit now, who will carry out the sport?” he continued. “You know, I have been fighting alone to come this far, but I don’t want young athletes to do the same. I will go as far as I can.”