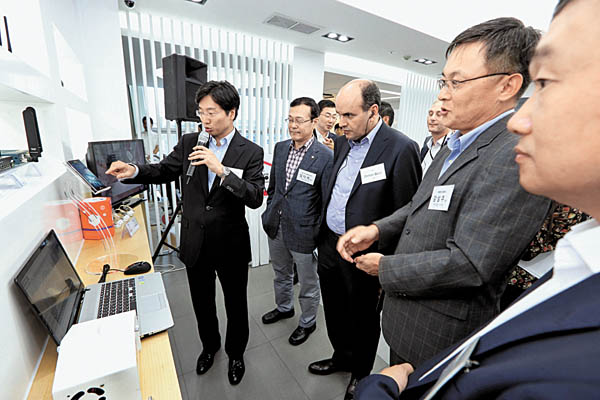 KT official explaining the practical application of the GiGA IoT service to visitors at the company’s center in Pangyo, Gyeonggi, on Tuesday.Provided by the company

Mobile carrier KT launched an alliance of Internet of Things businesses on Tuesday in Pangyo, Gyeonggi, with some 100 global companies, including Samsung Electronics, Nokia and China Mobile, as partners.

The GiGA IoT Alliance will help its members come up with IoT-related business ideas, commercialize them and hopefully advance into overseas markets. KT, the country’s second-largest mobile service, said any developers or businesses with fresh ideas or cutting-edge technologies could take advantage of the alliance.

“KT has launched the GiGA IoT Alliance to revitalize the IoT business, in which smartphone devices, software and networks should converge,” said Yoon Kyung-lim, head of KT’s future convergence business office. “We plan to clinch additional partnerships with a variety of companies specializing in IoT, on top of 100 companies that have already joined the alliance.”

IoT connects various things to the Internet through cloud technology, making it possible to transfer data over networks without human interaction with each other or with computers.

Companies and individuals in the alliance will be allowed to take advantage of various facilities and platforms inside the Gyeonggi Center for Creative Economy and Innovation, which has been operating since March 30.

The alliance will use the GiGA IoT business partnership center inside the creative economy center south of Seoul and KT-Nokia IoT Lab, which opened in July in Samseong-dong, southern Seoul. Software called IoT Makers and a GiGA IoT portal site will help members develop their business ideas online.

With the domestic smartphone market increasingly saturated and facing the challenge of limited growth in the number of subscribers, Korean mobile carriers have been seeking alternatives to propel growth. IoT is considered a likely avenue, since it can connect mobile carriers’ customer pools with broader services such as media.

Samsung Electronics has also said it considers IoT a crucial growth engine. The tech bellwether said all electronic devices it manufactures will be connected to the Internet by 2020.