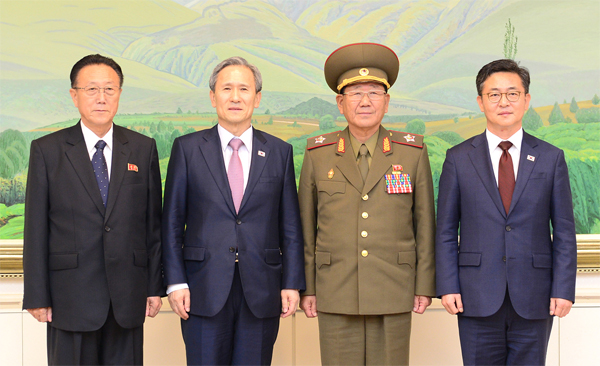 North and South Korean officials pose for a photo after wrapping up 43 hours of talks to reach a deal at the truce village of Panmunjom early Tuesday morning. From left: Kim Yang-gon, the secretary of the Central Committee of the Workers’ Party; Kim Kwan-jin, the South Korean director of National Security; Hwang Pyong-so, the director of the General Political Bureau of the North Korean Army; and Hong Yong-pyo, the South Korean unification minister. Provided by the Blue House

South and North Korea reached a deal on a six-point agreement early Tuesday after 43 hours of talks, putting a halt to rising tensions on the peninsula that brought the two rivals on the brink of an armed conflict.

The two sides wrapped up discussions around 1 a.m. Tuesday, defusing tensions that had escalated over the past few days after Pyongyang agreed to express regret over land mine blasts on Aug. 4 that left two South Korean soldiers seriously injured.

In return, South Korea consented to stop propaganda broadcasts via loudspeakers along the demilitarized zone (DMZ), which will go into effect at noon on today, accepting Pyongyang’s demand that the psychological warfare be halted.

The broadcast campaign was resumed on Aug. 10, 11 years after it had been discontinued, in retaliation for a series of land mine detonations a week earlier on the southern area of the border, for which Seoul blamed Pyongyang.

An apology from the North was one of the South’s key demands in the talks. In the end, Pyongyang agreed to provide an expression of “regret” over the incident, which Seoul accepted, agreeing to halt its propaganda in exchange.

While the North’s expression of regret over the land mine incident falls short of Seoul’s initial demand for an apology, it is thought to have been somewhat of a concession for the South – Seoul could essentially claim it as an apology, while the North contends otherwise to its people.

Averting armed conflict was also a top priority for the four negotiators, which likely prompted them to take a step back from their initial positions.

Under the agreement, Seoul leaves open the possibility that it may resume its anti-Pyongyang broadcasts. The pact states that the South would stop the campaign in the absence of any exceptional situations along the border such as the land mine blast.

Under the six point deal, the two Koreas also agreed to hold talks either in Seoul or Pyongyang to improve inter-Korean relations on multiple fronts, including in business cooperation and cultural exchanges.

The North, likewise, agreed to lift its declaration that the two sides were in a “quasi-state of war,” which it imposed on its troops Thursday after firing artillery rounds across the border.

The four-member panel also agreed to arrange working-level talks so that both countries could hold reunions for the families separated by the 1950-53 Korean War on the occasion of the Chuseok Holidays next month.

The 43-hour marathon talks involved Kim Kwan-jin, South Korea’s director of National Security; Unification Minister Hong Yong-pyo; and their North Korean counterparts, Hwang Pyong-so, the director of the General Political Bureau of the North Korean Army, and Kim Yang-gon, the secretary of the Central Committee of the Workers’ Party, who oversees inter-Korean relations for Pyongyang.

The agreement holds significance in that the two longtime foes found a way to avoid an armed conflict through negotiations. It has also raised hopes that it could lead to a thaw in frosty Seoul-Pyongyang relations, which saw all inter-Korean business projects halted except for joint operations at the Kaesong Industrial Complex north of the border.

Military tensions on the peninsula spiked to levels not seen in years after the North put its troops under a quasi-state of war and bolstered its artillery units along the DMZ, as the South vowed retaliation in the event the North attempted any further provocations.

At a briefing at the Blue House, arranged at around 2 a.m. on Tuesday following his return to the South from the Panmunjom truce village, national security adviser Kim said that it was “very fortunate” the two sides were able to reach a deal that provided a momentum for an improvement in inter-Korean relations, adding that the outcome reflected the South Korean government’s “strong principles” on North Korea policy.

On the prolonged talks, the former defense minister said the two sides had initially had wide differences on the land mine incident but that the South insisted on drawing out a promise from the North that such provocations would not recur.

“We halted our broadcast campaign on the condition that there should be no recurrence [of military provocations along the DMZ], which is significant and allowed us to achieve our objective [on the issue],” he said.

“Until now, North Korea gained concessions from the South by stoking tensions among our people. But it must have realized this time that such tactics would not work anymore under any circumstances,” Kim added.

He continued that it was too early to discuss the possibility of a summit between President Park Geun-hye and North Korean leader Kim Jong-un. The two top officials have yet to meet. 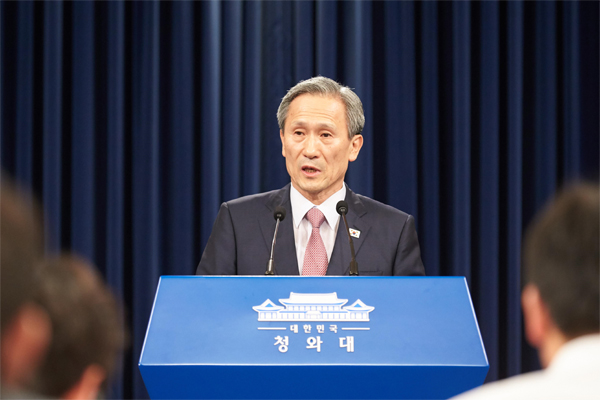 Director of National Security Kim Kwan-jin announces a six-point agreement drawn up after 43 hours of talks with his North Korean counterparts at 2:02 a.m. Tuesday at the Blue House following his return from discussions at the border village of Panmunjom. Provided by the Blue House

1. North and South Korea agreed their officials would hold talks in Pyongyang or Seoul at an early date in order to improve ties and have multi-faceted dialogue and negotiations in the future.

2. The North expressed regret over recent land mine blasts that occurred on the Southern side of the Demilitarized Zone (DMZ), which maimed two South Korean soldiers.

3. South Korea agreed to stop all loudspeaker propaganda broadcasts along the military demarcation line from noon Aug. 25, considering no unusual activity along the border occurs.

4. The North will lift its quasi-state of war declaration.

5. North and South Korea agreed to arrange reunions for the families separated by the 1950-53 Korean War on the occasion of the upcoming Chuseok Holidays in September and continue to hold reunions in the future. The two sides agreed to have working contact with the Red Cross for the event in September.