An gets gold at World Judo finals

An gets gold at World Judo finals 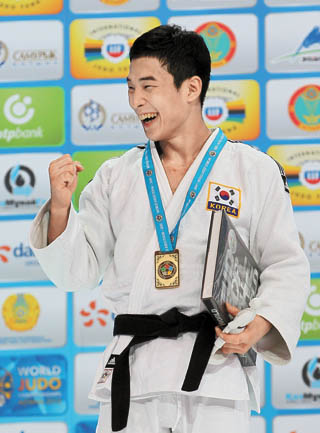 At the Worlds in Astana, Kazakhstan, on Tuesday, An beat Russia’s Mikhail Pulyaev during sudden death in the men’s under 66-kilogram final. It was Korea’s first gold medal in the Worlds since 2011, when Kim Jae-bum topped the men’s 81-kilogram category.

An and Pulyaev weren’t aggressive in the final, with each being penalized just 34 seconds into the bout for not engaging. They eventually finished the regular rounds with three shidos, or penalties, each.

Within a minute of the sudden death round, 21-year-old An attempted a seoi nage (shoulder throw) three times, which demonstrated his aggressiveness. Pulyaev was given his fourth shido and gave up the world title.

It wasn’t An’s first time on the podium, as he had won gold at the World Championship Juniors in 2013, but it was his first win in the major league.

“I am so happy that I really can’t believe it,” he said after the victory. “The gold medal in the Worlds is what I always dreamed of, and I have my coach and all of my teammates to thank.”

An’s coach is Choi Min-ho, the 2008 Olympic champion and winner of the 2007 Worlds in the 60-kilogram category. An says he wants to follow in Choi’s footsteps and use the two-arm shoulder throw as his main weapon.

An started judo when he was in fifth grade. He was already a top prospect when he was with Kumgok High School in Namyangju, Gyeonggi, sweeping almost all national competitions in the 55-kilogram category and even beating college judokas.

After going to Yongin University in 2013, An started in the 60-kilogram weight class, but due to tough competition in the category from judoka Kim Won-jin, he decided to move up in late 2013.

An said he ate five meals a day to get to 66 kilograms, eating foods like fried chicken and pizza at night. His hard work paid off in November 2014 when he took silver at the Judo Grand Prix in Jeju - despite not receiving a seed.

He kept getting better, winning the European Open in March and taking silver at the Asian Judo Championship in May. Last month, he took gold in the Gwangju Summer Universiade.

An is regarded as one of Korea’s best young hopes for a Summer Games gold, along with fellow Yongin University student An Chang-rim, who competes in the under 73-kilogram category.

An Chang-rim also won gold at the Gwangju Summer Universiade.