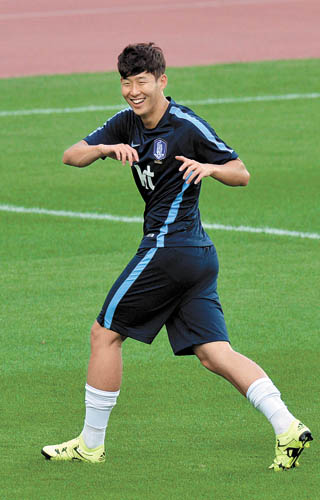 Tottenham Hotspur’s new forward Son Heung-min said on Monday he was “proud” of his record transfer fee and vowed to work through tough competition to become a regular member of the English Premier League (EPL) club.

Son, 23, last week signed a five-year contract with the London-based club with a reported transfer fee of 22 million pounds ($33 million) from Bayer Leverkusen in the German Bundesliga, making him the most expensive Asian player in Europe.

“I feel proud that Tottenham has placed that much value in me,” Son said at the press conference before the national team training session at the Hwaseong Sports Complex in Hwaseong, Gyeonggi.

“Now, I will show that value in the stadium. There will be competition everywhere, but first I will take it step-by-step to survive, instead of rushing to become a regular member for
Tottenham.”

Son was officially introduced to home fans at White Hart Lane before the EPL match against Everton on Saturday. He became the second Korean to play for Tottenham after retired leftback Lee Young-pyo played there from 2005 to 2008.

“It [the EPL] is the league that I have dreamed of from childhood,” he said. “I got goose bumps when so many fans welcomed me at the home stadium.”

“I want to exchange uniform [jerseys] with them,” he said. “There is still time left to play against them. First I want to make my Tottenham debut in a match against Sunderland AFC [on Sept. 13].”

Son, who is now the 13th Korean to play in the EPL, returned to his homeland for the 2018 World Cup second round Asian qualifiers where Korea faces Laos on Thursday in Hwaseong, Gyeonggi. But he will not join the national team’s trip to Lebanon next week after coach Uli Stielike decided to leave him at home to finish the paperwork for his visa and work permit issues in England.

“Although I didn’t play many matches like others, my condition is good,” he said for the match against Laos. “What’s important is getting a victory, not about who scores a goal. Not only myself, but there are many other players in the national team who can score goals.”

Son was among the four Europe-based national members that returned to their homeland on Monday for the upcoming World Cup qualifiers.

The Korea Football Association (KFA) said Swansea City’s Ki will return to Korea today after he played in the team’s 2-1 victory over Manchester United in the EPL on Sunday. Crystal Palace’s Lee already arrived in Korea on Sunday.

Meanwhile, the KFA said that midfielder Koo Ja-cheol will not play a match against Laos for his transfer deal in the German Bundesliga.

Koo, who is with Mainz 05, landed in Korea on Sunday for the World Cup qualifiers, but the KFA said that he left for Germany on Monday to complete medical tests and ink a transfer deal to FC Augsburg.

The 26-year-old first played for Augsburg in the 2011-12 season on loan from Wolfsburg. He helped save the team from relegation by scoring five goals in 15 matches, and also stayed with Augsburg in the following season before returning to Wolfsburg.

Koo signed with Mainz in January last year for a club record of 5 million euros ($5.6 million) in a transfer fee. Augsburg, which finished fifth last season in the German Bundesliga and earned a spot to the Europa League, already has two Korean players: defender Hong Jeong-ho and forward Ji Dong-won. If Koo seals the deal, this will be the first time that three Korean footballers will play on the same team in Europe.

The KFA said it decided not to pick a replacement for Koo in the Laos match. It, however, will announce in the near future if Koo will join the team against Lebanon next Tuesday.