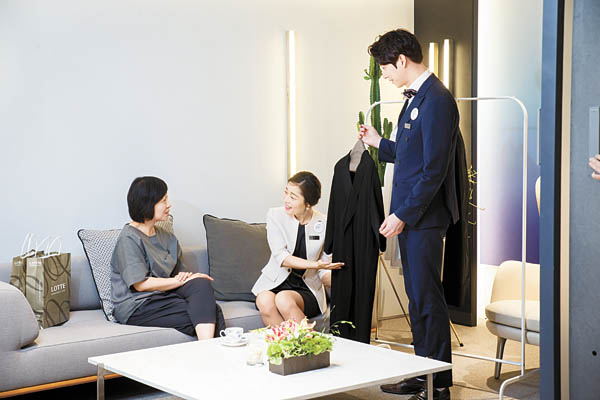 A shopping consultant at Lotte Department Store helps a customer. Personal assistance to VIPs is one of several services the store offers. Provided by the company

One important aspect of this year’s NBCI report is the improvements that low-ranked brands made to their brand management, or the efforts to boost how a brand is perceived by consumers.

The gap between the NBCI scores of top-ranked and bottom-ranked brands shrank, which shows that domestic brands are becoming more competitive overall. But it also indicates that brand management will be increasingly crucial in the future.

Although even the low-ranked brands have done well on paper this year, their marketing decisions were concentrated on pricing - a short-term tactic that boosts sales in times of economic depression. But in an era where brand image is a crucial part of how consumers make buying decisions, low-ranked brands should focus their resources on improving fundamental elements of their brand through product development and quality control.

Among the leading brands announced this year, Paris Baguette, Lotte Department Store and Gmarket are all good examples of how consistent brand management and improvements to products and services can lead to success. 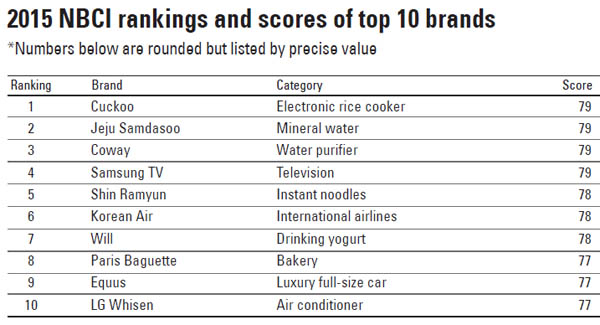 Paris Baguette, this year’s leading brand in the bakery category, was the first to introduce European-style bread in South Korea. Paris Baguette’s products go hand-in-hand with their brand identity, which is based on their connection to baked goods from Europe.

Their newly released “The Delicious French Bread” is one example of how Paris Baguette works to maintain its brand identity. The new product is made in stone ovens using a traditional French method of baking and includes cheese, chocolate and nuts for a rich flavor.

As one of Korea’s leading bread manufacturers, Paris Baguette has released a variety of products that combine high-quality bread and innovative ingredients or themes, particularly those familiar to Korean consumers, such as bulgogi (marinated beef). The innovative integration of Korean and European cuisine contributed to the brand’s success when it expanded to the city of Paris. Kopan, the product that first gained popularity in the Paris branch, is a combination of French brioche bread and Korean sweet red-bean paste.

Lotte Department Store has placed first in the department store category for 12 years in a row. The store’s recent marketing strategy is reflected in the management philosophy of current CEO Lee Won-joon, who emphasizes that the answers to business questions can often be found by listening to customers and understanding their needs.

One example of Lotte Department Store’s marketing philosophy is its widened parking spaces for customers with strollers. Lotte was the first department store to offer the spaces, which are 1.5 times wider than normal. Other examples of how the store caters to its customers’ needs include its valet parking service and complimentary beverages to customers waiting inside. The company’s services have been so consistently lauded that last June, Lotte Department released a book detailing its unique services and the testimonies of its customers.

Apart from providing quality products and services at their branches, Lotte Department Store also promotes culture and the arts around Korea. Last October, it collaborated with Dutch artist Florentijn Hofman on the “Rubber Duck” installation, in which a huge rubber duck was placed in Seokchon Lake, right beside the Jamsil Lotte Department Store. Last May, 1,600 papier-mache pandas were also displayed in the Seokchon Lake area.

Gmarket has led the open market category for nine consecutive years. As an online shopping platform that connects merchandisers and customers, a major part of Gmarket’s strategy has been to enhance its delivery service.

Last July, Gmarket concluded a business agreement with the hypermarket brand Homeplus, opening a Homeplus section on its website. If an order is finalized before 4 p.m., the product will be delivered the same day. Gmarket is also running the “Smart E-Mart Store” in which the customer can receive multiple products from different merchandisers in the same delivery. Same-day delivery is also provided as long as the order is processed before 6 p.m.

The company has also focused its PR around the delivery sector. In August 2014 - a month before the biggest Korean holiday, Chuseok, which also marks a spike in deliveries - Gmarket surprised its deliverymen with presents and messages of support. The company filmed the whole process and uploaded the video to YouTube. Last March, the video won the online category at the Consumer’s Choice Advertising Awards.

Gmarket was an early innovator in the mobile shopping channel, as the company was the first in Korea to launch a shopping application for smartphones, in 2009. Last year, they upgraded their payment system by launching SmilePay which shortened the payment process after a user registers his or her credit card.

Gmarket has also focused PR campaigns around smartphones. In the Free Wi-Fi Bus project last spring, the company installed Wi-Fi inside 40 Seoul buses. If more than one passenger with the Gmarket application connected to the bus’s Wi-Fi, all other passengers were guaranteed free Wi-Fi as well. From last February to April, free smartphone charging centers for users of the Gmarket application were also installed in bus stops around Seoul.