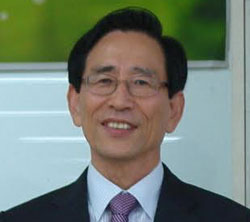 On Aug. 31, a retirement ceremony was held at the Changwon campus for one of the most esteemed educators at Korea Polytechnics.

Professor Han Dong-ryong, now 65, was the first trainee at the country’s vocational training center in the 1970s, but at the time he was also struggling desperately to lift himself out of poverty.

Eventually going on to become the school’s first instructor, he committed himself thereafter to the field of technology and its advancement, helping to form the foundation for Korea’s success later on.

“I taught and nurtured my students based on my knowledge of technology, and they built the world’s leading companies, contributing to the nation’s wealth,” Han said. “I feel really great about it.”

In the 1970s when the central vocational training center - now the Incheon campus of Korea Polytechnics - was established with the support from the United Nations, Han entered the institution as its first trainee.

At the time, annual average income per capita in Korea was just $300.

“When I was a student at Busan Jisung vocational high school, I picked up a block of scrap steel that was rolling about at the construction site to learn to process it. That wasn’t proper technology,” Han said, adding that he had been far from confident as a new student.

He felt even more intimidated when his advisers from developed nations skillfully demonstrated the newest in advanced technology. That was when he realized he would have to learn from the bottom and work his way up. Upon his graduation, the village was buzzing with excitement.

“My parents were tearful over the thought that I would finally be free from hunger,” Han said.

Afterward, he was hired as a teacher at a polytechnics college in Busan established as part of an effort by Germany to share and disseminate its technology. Han was the first teacher employed there. Then when the government set up more vocational schools in Daejeon and Ansung, he developed the strategy and drew up the curriculums.

He was involved with so many of the nation’s vocational schools in the 1970s, though rarely did Han ever have a chance to revel in his accomplishments. Rather, he simply continued on with his work.

“My thoughts then were focused on creating skilled manpower trained in chemicals and heavy industries. I was charged with that sort of sense of duty,” he said.