After misstep, Hyun looks to move on

After misstep, Hyun looks to move on 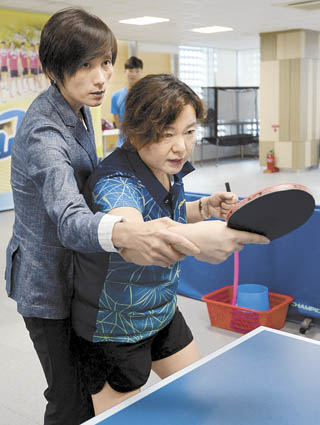 Hyun Jung-hwa, 45, is a legend in Korean table tennis history.

In the 1988 Summer Olympics in Seoul, she won the gold medal with Yang Young-ja, cruising against dominant Chinese teams. In the 1992 Summer Games in Barcelona, Spain, Hyun collected two bronze medals in the women’s singles and doubles.

When it comes to the World Table Tennis Championship, Hyun is the only Korean to have achieved a Grand Slam by winning the singles (1993), doubles (1987), mixed doubles (1989) and team event (1991). She is also the first Korean to be inducted into the International Table Tennis Federation’s Hall of Fame in 2011.

Even after her retirement in March 1994, Hyun has been extending her impressive career as a coach and
administrator.

However, her reputation was damaged last October after she was convicted of drunk driving after a collision with a taxi.

The incident was a shocking disappointment to fans. Hyun was then-head of the athlete’s village for the Incheon 2014 Asian Para Games but retired from the position immediately.

Until October, she will teach at clubs in Seoul and cities such as Busan, Gwangju and Daegu twice a month. Ilgan Sports, an affiliate of the Korea JoongAng Daily, talk with Hyun during her bus trip to the clubs last month.

Q. What do you think about the accident last year?

A. I was drinking often back then because I was having a difficult time. But I don’t want to make excuses because it’s all my fault. I thought it was all over and that I would have to leave the table tennis world forever. Since it was during the Asian Games period, I really thought it was a major transgression.

You quit the athlete village chief position right away. Why?

It was the right thing to do. When I was about to blow my breath into the electronic testing device, I just told police I had a drink. The police then asked me whether I should go through with a blood test, but I told them it’s not necessary. After the police investigation, I called all the people related to my work and told them I have to leave because of the incident, while asking forgiveness.

Was it really difficult for you to deal with the scandal?

I heard that our team’s assistant coach Park Sang-joon cried a lot because he didn’t take good care of me. I was really sad because I realized that I broke the hearts of people who were close to me. But I also thank those who helped me when I was in trouble. I was consoled by those people when I believed that my life was not worthwhile .

Did you settle with the injured party?

The day after the accident, I went to the hospital where the customer in the taxi was getting treatment. When he saw the bruises on my arms and legs and told me to receive treatment, it was so moving that I almost cried. He said he was fine and that I shouldn’t worry, so we settled very well. After the visit, I had dinner with his family a couple of times. He told me that it may have been an act of providence for us to meet.

You seem to not be afraid of talking about the accident. Why?

I’m a person with a positive mind. Of course, I did commit a big mistake. I have to take responsibility for my actions, but I don’t want to run away or hide. I lost a lot of things, but at the same time, I know the importance of people around me. It also became an opportunity to set my goals right and start again.

Do you still drink these days?

I sometimes drink soju. Beer and ‘bomb shots’ [beer mixed with soju] get me too full. I don’t like the smell of whiskey. People can criticize me for drinking again, but I apologize and tell them I will never make the same mistake again. Drunk driving is a crime, but I think drinking itself is not. After the accident, I sold my car.

You were preparing to become an IOC member. Is that goal now gone?

I emptied my mind and put down everything. I had that dream before but knew it was not going to be easy because there are many young athletes who can go for that position. The reason why I wanted to be the IOC member was because I wanted to provide a better environment and conditions for young athletes.

I believe there are other ways to do so. I want table tennis athletes to be able to make a living with the sport, even if they are not good at it. In the future, I really want to make a table tennis academy. I received a lot of support through table tennis. I think I can contribute to fostering young athletes.

After the retirement, you’ve been busy as a coach and administrator. How do you feel right now?

Honestly, I feel good. In the past, I sometimes thought work was too much for me, and I was full of a sense of duty, but now I’m a little relaxed. Now, I meet people from various areas, and I’m surprised and think, ‘Am I still really that popular?’

What does soju mean to you?

(Laughs.) I think soju is life itself. It embraces joy and the sorrow of life and makes this rigorous society softer. I think it’s a thing that is essential to this world.