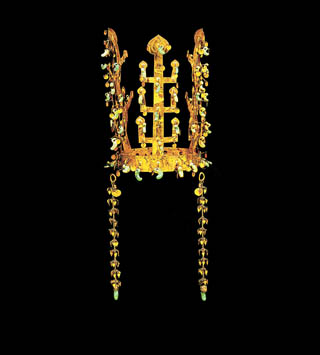 The main item, the gold crown, has a height of 44.4 centimeters (17 inches) and headband diameter of 19 centimeters, displaying the typical features of Silla crowns with three tree-shaped ornaments in the front and a pair of antler-shaped ornaments on the back.

The base band and ornaments are decorated with many dots and hung with jade drops and gold leaves.

The crown also has a pair of gold chains hanging down and decorated with gold foliage clusters arranged at regular intervals and a jade drop at each end.

Art historians believe that the decorations are connected with shamanism, which was widespread during the Three Kingdoms era (57 B.C. to 668 A.D.).

The crown is generally regarded as the greatest among all the Silla crowns discovered so far.