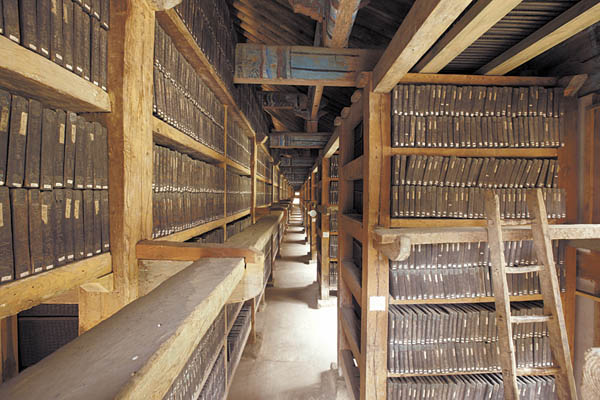 The Tripitaka Koreana, one of the most famous pieces of Goryeo cultural heritage, which is kept at Haein Temple in Hapcheon, South Gyeongsang. Provided by the CHA

A series of recent discoveries in the area of cultural heritage are helping improve our understanding of the ancient Goryeo Dynasty (918-1392).

Goryeo is often considered the kingdom that attempted to succeed - and emulate - Goguryeo (37 B.C.-668 A.D.), the kingdom that Koreans (even North Koreans) are particularly proud of for its military prowess, vigorous spirit and massive territory.

In fact, the word Korea was derived from Goryeo, which in turn stemmed from Goguryeo.

Goryeo, which was a Buddhist kingdom, is best-known today for heritage items like Buddhist paintings, lacquerware inlaid with mother of pearl and the Tripitaka Koreana woodblocks (also called the Palman Daejanggyeong).

But as is particularly the case with periods that preceded the Joseon Dynasty (1392-1910), these perceptions of Goryeo hardly present the whole picture.

Fortunately, recent findings are helping fill gaps in our knowledge of the long-lost kingdom.

The coffin, according to carbon dating, is from between the 13th and 14th centuries.

“The two mantras pray for both salvation for the people and rebirth in paradise,” Jo Sang-sun, the institute’s curator, said. “But this marks the first time that the seven-syllabled Sanskrit mantra was discovered on a Goryeo-era wooden coffin.”

Last year, archaeologists also found a bronze container, spoon and tray in the tomb. The tray, in particular, had a bundle of hair on it. But the institute is conducting further study to find out whom the tomb and burial items belonged to.

On Aug. 26, the Korean government announced it would designate an ink stick from the Goryeo era as a state treasure.

The ink stick was actually unearthed in 1998 from a wooden coffin found in Cheongju, North Chungcheong. Measuring 11.2 centimeters (4.4 inches) long and 4 centimeters wide, it is shaped like a tombstone and features a graceful dragon pattern.

Such sticks were used in ancient times to produce ink for writing.

According to the Cultural Heritage Administration (CHA), the ink stick was found in the coffin above the head of the occupant and split in two. The CHA said it is oldest ink stick in existence today.

According to Kim Eun-yeong, an official at the CHA’s tangible heritage division, the engravings on the ink stick indicate that it was made in Danyang, North Chungcheong. The region is known to have produced some of the country’s best ink sticks, according to historical records from the Joseon Dynasty. 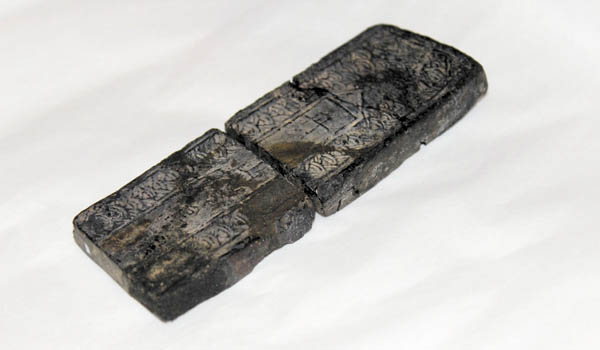 Sanskrit letters written with gold powder on a wooden coffin, also from Goryeo. Provided by the CHA

“Korea has been using ink sticks since the Three Kingdoms Period [57 B.C.-668 A.D.],” Kim said. “Records say Maengsan, Suncheon and Danyang were the major producers of ink sticks, and Danyang’s ink sticks were prestigious well into the Joseon Dynasty.”

One of the biggest cultural achievements from the Goryeo era is undoubtedly the Tripitaka Koreana, the most complete collection of Buddhist texts in the world.

It refers to a collection of 81,258 carved wooden printing blocks made between 1236 and 1251. It is Korea’s National Treasure No. 32 and also registered on the Unesco World Heritage List. The texts are currently kept at Haein Temple in Hapcheon, South Gyeongsang.

The undertaking of such a large-scale project was possible because Buddhism was at its heyday during Goryeo, and there were many patrons of Buddhist art, especially in the royal court.

But recently, there has been debate about the exact number of wooden blocks. The CHA said early last month that its research revealed the number of blocks to be 81,352 - 94 blocks more than the 81,258 figure recognized since 1915.

The additional blocks were made over the years to replace those that broke, and include 36 made in 1915 and 1937 by the Japanese during their colonization of Korea.

“We believe there has to be a nationwide consensus on whether or not these blocks should also be recognized as part of the Tripitaka Koreana,” a CHA official said.

While some oppose the idea, supporters say if the Japanese created them while in the process of restoring or repairing the Goryeo-era blocks, then they are acceptable.

The CHA said it will organize academic conferences and public hearings on the matter in October.

Should Korea decide to recognize the additional blocks as part of the Tripitaka Koreana, the government should revise the description of the texts on the list of National Treasures and the Unesco World Heritage List.