Korea on target to make it three in a row

Korea on target to make it three in a row 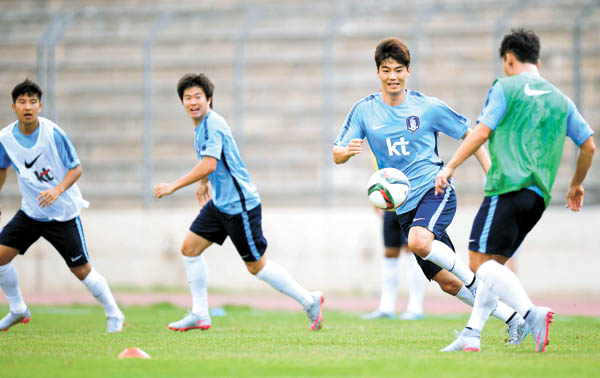 Korea hopes it will be third time lucky in continuing their run in the 2018 FIFA World Cup second round Asian qualifiers.

After overwhelming Laos 8-0 in the Asian qualifiers on Thursday at Hwaseong, Gyeonggi, the men’s national football team travelled to Lebanon on Sunday and have been training in Beirut.

On Monday the team moved to Sidon, about 40 kilometers (25 miles) south of Beirut, where they will play their third match in the World Cup regional qualifiers starting at 11 p.m. tonight, local time, at Saida International
Stadium.

Korea is on a two-game winning run in the second round Asian qualifiers after a 2-0 victory over Myanmar in June and a rout over Laos last week. Meanwhile, Lebanon is 1-1 following their 1-0 loss to Kuwait and 2-0 win over Laos.

At first glance, Korea, which is ranked 57th in FIFA rankings, should collect an easy win from Lebanon, which is ranked No.133. Korea also leads in the overall head-to-head record with seven wins, two draws and one loss.

However, with two clashes on Lebanese soil to come, it’s a different story as Korea’s last victory dates back to May 1993. In the last three encounters in Lebanon, Korea collected two draws and one loss.

National team coach Uli Stielike, however, said he isn’t bothered by the history in Lebanon.

“The past is the past,” said Stielike. “I can’t understand why people are comparing the current team with the past record. I want people to evaluate us by looking at our performance for a year.”

In 2004 during qualification for the 2006 FIFA World Cup, Korea drew 1-1, and in November 2011, for the third round of the 2014 FIFA World Cup qualification, the team suffered 2-1 in a loss which later served as one of the top reasons for the Korea Football Association (KFA) to dismiss then coach Cho Kwang-rae. The most recent match in Lebanon was in June 2013 where Korea drew 1-1.

The Taegeuk Warriors are currently staying at the top in Group G, along with Kuwait on six points, as both have identical goal differences and goals scored.

Since Kuwait is expected to collect their third victory against Laos on Tuesday, Korea needs a victory to maintain their position in Group G.

In the second round, where there are eight groups of five countries, the group winners and the four best runners-up will advance to the next round of qualification.

In the EAFF East Asian Cup last month, Korea won the trophy but struggled to score goals. The concern was washed away with the 8-0 victory over Laos last week, but forward Son Heung-min, who scored a hat-trick against Laos, is not with the team as he is still completing paperwork since his transfer from Bayer Leverkusen to Tottenham Hotspur.

Instead, the national team added two German Bundesliga players to the team.

FC Augsburg midfielder Koo Ja-cheol and Borussia Dortmund’s Park Joo-ho, who can both play midfield and left fullback, are expected to start against Lebanon.

“This is the first time I heard we had a jinx in Lebanon, but I will try my best to execute my role and help our team to win,” Koo said to reporters in Beirut on Sunday.

Koo and Park are likely to form center midfield with team captain Ki Sung-yueng who showed accurate passing skills against Laos last week. Koo is expected to be given a greater attacking role, while Park is to support Ki from behind.

For Ki, the match against Lebanon should also be a new experience. When Korea visited Lebanon in 2011 and 2013, the 26-year-old Swansea City midfielder didn’t play and watched the team come away with a draw and a loss, respectively.

“Thinking about the past, I remember they [Lebanon] were difficult opponents,” Ki said.

“Although we don’t have to be afraid, since there are some environmental factors to consider, we should be thoroughly prepared.”