One survivor’s turn to activism

One survivor’s turn to activism 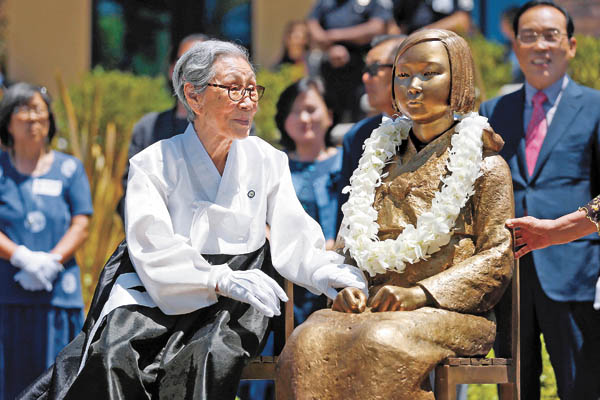 Kim Bok-dong, a women’s rights activist who survived sexual enslavement at the hands of Japanese forces during World War II, touches a statue that was unveiled in Glendale, California, on July 30, 2013, to honor Korea’s “comfort women” victims.[JoongAng Ilbo]


The JoongAng Ilbo collected the oral histories of 13 survivors of sexual slavery during World War II over the past month. As all the women are in their 80s and 90s, this may be their last record of their personal stories. The series marks the 70th anniversary of Korean liberation from colonial rule and the JoongAng Ilbo’s 50th anniversary. This is the eighth in the series.

Kim Bok-dong, an 89-year-old wartime sexual slavery survivor, is now recognized internationally as a central figure in the weekly Wednesday rallies held in front of the Japanese Embassy in Jongno District, central Seoul.

For the past 24 years, Kim has participated in these Wednesday demonstrations alongside other survivors, civic organizations, rights activists and students to demand an official apology and compensation from Japan, which sexually enslaved some tens of thousands of young women and girls during World War II, often abducting them from their home countries and transferring them to frontline military brothels, known as “comfort stations.”

“We speak of the Wednesday demonstrations all the time, so I guess it can be repetitive,” says Kim. “But it is better to be repetitive. In the beginning, there were people who criticized us, asking us why we would boast of something so shameful.” 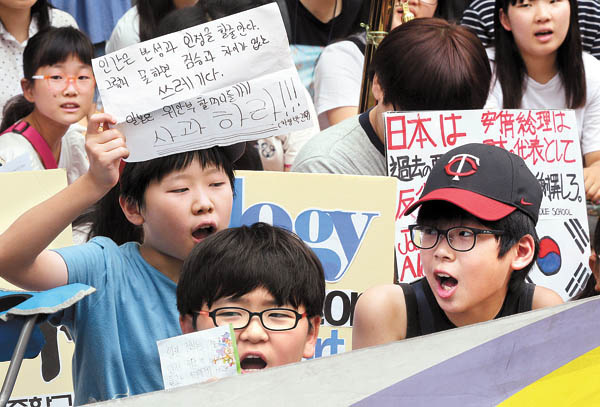 Children participate in the Wednesday rally on Aug. 19. in front of the Japanese Embassy in Seoul. [JoongAng Ilbo]

In 1991, the late Kim Hak-sun spoke out for the first time about her experiences being forced to serve as a so-called comfort woman for the Japanese military, which inspired other victims to come forward with their stories and brought awareness to the issue.

The Korean Council for the Women Drafted for Military Sexual Slavery by Japan has held weekly Wednesday rallies demanding a resolution to the issue since January 1992, usually in front of the Japanese Embassy in central Seoul.

These protesters seek justice for the young women and girls forced into sexual slavery by the Imperial Japanese Army during colonial rule (1910-45), who were forced into military brothels throughout Asia.

Many of her fellow survivors have already passed on. And, almost a septuagenarian now, Kim Bok-dong has lost her vision in her left eye and cannot see well out of her right eye.

But that doesn’t stop her from heading to the Japanese Embassy each week. Aside from days when her body aches too much or she is ill, Kim never misses a Wednesday rally.

“When I think of Japan’s atrocities, I am depressed 365 days of the year, but the one thing that gives me strength are these rallies,” Kim says. “There are people who come out even though it’s not their issue, and when I meet those people, I am most thankful and happy.”

At the time, Kim was living alone in Busan and took a train to Seoul to participate in the demonstrations.

Sometimes she protested in silence, sometimes loudly. But there was no response.

“In the beginning, we thought they [the Japanese government] would understand if the victims spoke up in public in person,” she says. “We thought that we would get an apology right away, but that was not the case.”

But one of Kim’s greatest grievances is not toward the Japanese government, but toward the Korean people who shamed the victims for publicizing their stories.

“At that time, transportation was not as good as it is now. In the middle of summer, we sweated heavily and in the winter, we rode on a bumpy bus and walked a long way, and there were many people who frowned upon the protests.

“There were some people who did not let their children watch.”

“One day,” she continues, “there were people who said: ‘What are you doing revealing this disgrace?’”

However, since the turn of the century, more people have begun taking part in the Wednesday rallies, including other former comfort women.

Nowadays, each rally draws out between 100 and 700 people, who join Kim in protesting in front of the embassy.

For the 1,000th Wednesday rally, held in December 2011, 3,000 people from around the nation participated in the demonstration.

Likewise, the rallies have been held internationally, in countries worldwide including Japan, the United States, Taiwan and the Philippines.

In September 2013, more than 100 French female activists and civilians took part in a Wednesday rally in Paris to demand Japan apologize to its victims.

Kim has also traveled the world to spread awareness about the women’s plight.

In 1993, she spoke at the World Conference on Human Rights in Vienna, and she has continued to testify over the past two decades.

She’s scheduled to travel to Europe again from Sept. 8 to 26, visiting Norway, the United Kingdom and Germany to share her story.

“I travel with the belief that when others learn how wretched it was for us, they will push Japan to resolve the issue somehow,” Kim says.

When visiting different countries, she adds, she often meets with other women who have suffered through similar tragedies.

To mark International Women’s Day in 2012, Kim pledged that if she were to receive compensation from the Japanese government, she would donate the entirety to help the women and children who were brutally raped and sexually assaulted during the civil war in the Democratic Republic of the Congo.

The Korean Council, in accordance with Kim’s wishes, founded the Nabi (Butterfly) Fund, a charity to help female war victims around the world.

“There are many female victims like us in other countries. It’s good that many people can donate and help them.”

Kim herself was abducted at the tender age of 15 to serve as a sex slave for Japanese troops in posts in Taiwan, Japan, Singapore and Indonesia.

After Korea was liberated from Japanese rule, Kim returned home but chose not to marry despite the fact that her mother sought out suitors for her. Her mother suffered from depression, Kim says, and passed away early. But even still, she never told her daughter’s secret, and after that Kim lived alone.

But when she attends the Wednesday rallies, children come up to her, and she says she finds them precious and endearing.

“When children come up to me, I can’t speak because I am so thankful and find them so cute and lovable,” she says. “For a child to grow up and never feel the anguish of helplessness - that is the reason I take part in these protests.”