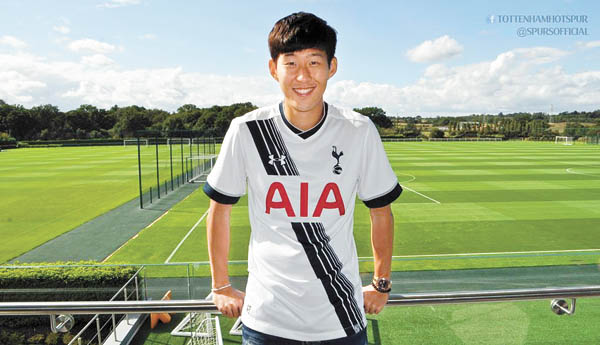 Tottenham Hotspur’s Son Heung-min poses at the team’s training ground in London after signing the deal. photo from the club’s Website

Son became the most expensive Asian player with a transfer fee of 30 million euros ($34 million) moving from Bayer Leverkusen in Germany to Spurs. Wearing the No. 7 jersey, fans are now anticipating whether the 23-year-old forward can be the “beloved son” of the London-based club.

Son left for England on Sunday after scoring a hat-trick in Korea’s 8-0 victory against Laos last Thursday in their 2018 World Cup second-round Asian qualifiers. He didn’t travel to Laos for the match on Tuesday in order to finish paperwork needed for his work permit in England.

In an exclusive interview with the JoongAng Ilbo for the newspaper’s 50th year anniversary, Son talked about his move and future plans.

Q. It was quite an issue when Leverkusen teammate Hakan Calhanoglu revealed that you missed training without notice and were unreachable before your transfer to Tottenham was confirmed. What happened?

A. Leverkusen gave me permission to take a medical test within 48 hours. I was still contracted with Leverkusen, so I couldn’t move without the club’s permission. Calhanoglu also made some noise when he was moving from Hamburg to Leverkusen. That’s why I said, “Wer im Glashaus sitzt, soll nicht im Steinen werfen” (People who live in glass houses should not throw stones), to the German media. It’s sad that Calhanoglu said that and that we are bickering. Since I didn’t say goodbye to the Leverkusen coaching staff and players in person, I will try to visit the team in the near future.

Was going for your medical the first time you visited London?

When I was with Hamburg, I visited London with my father for a trip. London is a city that has a lot of rainy days, but I didn’t decide on the team because of the city. I’m not going there for a trip.

Park Ji-sung said he decided on Manchester United in 2005 after he got a phone call from then manager Sir Alex Ferguson. Why did you decide to sign with Tottenham?

There was no phone call from manager Mauricio Pochettino. But after I signed the contract and met him in the first meeting, he joked by asking, ‘Why didn’t you come when I was managing Southampton?’ Tottenham plays aggressive football, which I like very much, and I like to pressure opponents from the front. I think I can be a better player if I train under Pochettino.

Lee Young-pyo, who previously played with Tottenham for three years from 2005, said Tottenham fans even put a blue hat on Santa Claus at Christmas because of their rivalry with Arsenal, who play in red. What do you think?

Tottenham officials already told me I can’t even buy a red car. I’m very excited to play against Arsenal. Whatever match I play, I want to score goals. Since I’m a forward, my goal-scoring record will speak for me.

I know Tottenham brought me here with big expectations. I know I have to do well, but instead of leaping forward in one big step, I would like to do it step by step. And then I believe good results will follow.

In the EPL, there are many top players. What do you expect from the league?

Since there are so many good players in the EPL, I want to challenge every one of them. Last season, I was happy I played at Old Trafford against Manchester United in the UEFA Champions League, but at the same time, I also felt there are many things I have to develop more. I want to visit Old Trafford, but Tottenham has already played an away game against Manchester United.

Does this mean that playing with Manchester United is your ultimate goal?

I didn’t say that. My ultimate goal right now is to show my best performance with Tottenham.

You speak German well, what about your English?

When I was playing in Germany, there were players who spoke English. Although I’m not good at it, I can speak basic English. Since I learned German quickly, I don’t think learning English will take much time. In fact, if you learn a new language, it’s a good advantage even when you retire.

Some people criticize you as a ‘papa boy.’ Don’t you want to get out from under the shadow of your father Son Woong-jung, who is also a former footballer?

I can understand people saying to me, ‘Why are you sticking with your father even if you are not a child?’ But he is still my father, my football teacher and leader. He took the footballer’s way first and wants to pave the way for me. When we decide something, we discuss it a lot, and I also have the right to make my own decisions. I got more freedom when I became an adult. But when my father is next to me, I can play football comfortably without concern. No matter what people say, his words are important to me.

You signed with Tottenham until 2020, but what about your military service? We know you can still compete in the Summer Games next year and 2018 Asian Games as a wild card.

Well, I’m still young, and I think there are a lot of opportunities [to contribute to my country]. If I can get a good opportunity, I know I can do well. But I don’t consider this a serious issue at the moment.

When Park Ji-sung retired from the national team in 2011, he picked you as a successor. How do you feel about it?

I’m honored to hear that. You know, Ji-sung goes down in the history of Korean football as one of the greatest players. Just before the 2011 Asian Cup, I was his roommate. Back then, he was difficult to get along with, so I went to sleep after he fell asleep. From my younger days, I watched him and his teammate Cristiano Ronaldo expand my dream. The title of Park Ji-sung’s successor is too heavy. I’m still far behind him, and there is a lot of pressure to have a title like that, but I’m working hard to become better.

Both Park Ji-sung and Cha Bum-kun engraved their names not only in Korea, but also in Asia and world football. To follow their steps, I still have a long way to go. I always feel appreciative when he says good things about me.

Did you watch FC Barcelona B forward Lee Seung-woo play?

I haven’t seen him play. As a Korean, I’m happy that there is a good player [with a major team] and I wish him very well. But if too many people raise their expectations, it can interfere with a player’s game. At the beginning, I think it’s right to encourage him to grow better.

Lee dyed his hair pink and kicked an advertising board when he didn’t score. What do you think about his activities?

I sometimes act like that, but even I think it doesn’t look nice. However, many people told me I become a different person when I’m on the pitch. Outside the stadium, I try to entertain others, but on the pitch, it’s a business. You show seriousness and express your feelings about the outcome. I don’t think it’s wrong to express yourself on the pitch.

Do you read newspapers a lot? Sometime there are stories that are not complimentary. How do you respond?

Since I’m in Europe, I watch Korean newspapers online. Germans read newspapers a lot. Sometimes the media shows harsh disrespect, but I try to understand. My father told me, ‘If a company needs to survive, it always needs to produce a new product. Because you are a footballer, you also need to have something special.’ But I sometimes think the criticism is too harsh. Sometimes you have to make cold decisions … and you are professional by accepting it.

Have you ever thought about marriage?

Honestly, I like football too much, so I want to get married late. Just like Ji-sung, I want to do it after I retire. When I get married, I could stay with my wife in Europe and have a child … but for me, football is the priority at the moment. I want to put all my passion as best as I can into football.