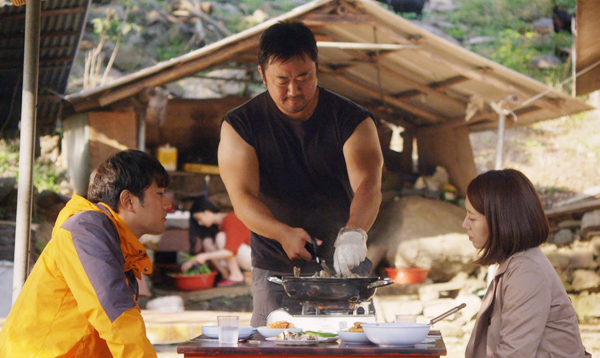 Thriller flick “Deep Trap,” directed by Kwon Hyung-jin, opened in third place in the local box office. It centers on a series of horrific traps set up by the mysterious restaurant owner Seong-chul (Ma Dong-seok), center, on a remote island. Provided by the distributor

With many of the anticipated films this fall timing their release for the upcoming Chuseok holiday, which starts Sept. 26, it was a slow weekend at the local box office.

Attracting 695,225 attendees in the second weekend of September at 969 screens nationwide, the film has so far accumulated 2.4 million ticket admissions in total, making 19.8 billion won ($16.7 million).

Ryoo Seung-wan’s cop action flick, “Veteran,” showed no signs of slowing down in its sixth weekend in theaters, landing in the No. 2 spot with 379,774 tickets sold. It has seen 12.5 million ticket admissions so far, earning 98 billion won. It is now the seventh most-watched film of all time in Korea, just behind Choi Dong-hoon’s “Assassination,” another summer hit released this summer. “Veteran” is expected to overtake its rival - which racked up 12.6 million ticket admissions - over the upcoming Chuseok holiday.

“Office,” a thriller set at a company, came down three spots to land in sixth place, attracting 75,942 moviegoers in its second weekend at the Korean box office, while “Self/less,” a U.S.-made sci-fi action film, debuted in seventh place with 74,380 tickets sold, which roughly translates to 715.5 million won.