When the coaches of six K-League Classic clubs were asked why they were determined to be in the top group of the split system, their answers were all either to maintain their pride or keep their revenues up.

After their next three matches - with the exception of FC Seoul, which needs to play four - the nation’s top football league will be divided into two groups. The top six teams are headed to the upper group, while seventh through 12th move to the lower.

Inside their group, the teams will play five more matches to determine their final standing of the season. The top team of the upper group grabs the championship, while the worst team in the bottom group is relegated to the second division K-League Challenge.

Defending champion and league No. 1 Jeonbuk Hyundai Motors - which now has to focus on the domestic league after losing to Japan’s Gamba Osaka 3-2 on aggregate at the AFC Champions League quarterfinals - and No.2 Suwon Samsung Bluewings have confirmed their spot in the upper group regardless of their remaining matches. 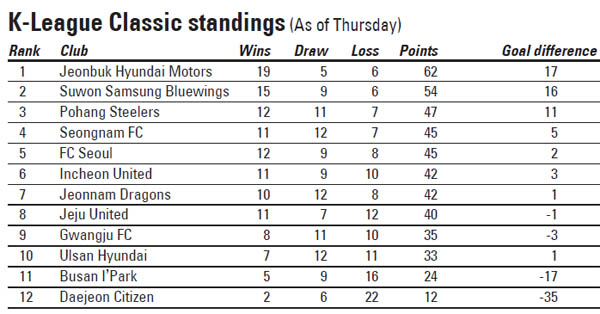 Third-ranked Pohang is likely to enter the upper group. Based in the port city in North Gyeongsang, the club has 47 points in the league standings, which is five points above No.7 Jeonnam.

If they don’t lose all three of their matches before the split, Pohang is in the upper group. Still, coach Hwang Sun-hong isn’t relaxing just yet.

“I don’t think we have booked our spot in the upper group,” Hwang said to Ilgan Sports, an affiliate of Korea JoongAng Daily. “Seoul still has one more match to play, while Jeonnam, Incheon and Seongnam are all in a tight race.”

Seoul was scheduled to play against Gwangju FC on Aug. 16, but the match was postponed to Sept. 28 due to the celebration of the 70th anniversary of Korean independence. If Seoul beats Gwangju later, the team is a step closer to the upper group.

“I don’t think about the fact that we have more one more match to play,” Seoul coach Choi Yong-soo said. “We needed to put our passion in every match to collect a win.”

The team in the most dire straits is No. 8 Jeju. If they lose just one of their three matches before the split, Jeju loses its chance of making it into the top group. The team’s 2-2 draw against Ulsan Hyundai on Sunday was especially painful after they allowed an equalizer in extra time.

“If we had defeated Ulsan, we could have had the same standing as Incheon and Seongnam,” Jeju coach Cho Sung-hwan said. “In football, you don’t know until the last minute. We will not lose our confidence.”

Why care about the top group?

The contenders say that team pride and prestige are at stake in the battle for the upper group. Former K-League champions are particularly clear that playing in the lower group is unacceptable considering their history.

“We are an elite club,” said Hwang, who leads five-time league champion Pohang. “Speaking honestly, I never thought of us going to the lower group. This is not arrogance, but rather pride.”

Seoul coach Choi admits that his club could fall into the lower group because anything can happen in football. But considering that Seoul has five K-League championship trophies, the 44-year-old knows that he needs to maintain the club’s reputation.

“Regardless of the split, Seoul should be a team that always competes at the top level,” he said.

In terms of pride, Jeonnam coach Roh Sang-rae could have the most at stake. Despite receiving financial support from steelmaker Posco, the team hasn’t been performing well and is in danger falling to the bottom group. “I made a promise to fans, players and the club that we will be inside the top six,” Roh said. “I won’t repeat our slippery tracks in the past. There are no excuses for the remaining matches.”

While keeping their pride is the most oft-stated reason for wanting to stay in the upper group, another important factor is financial. Top-ranked clubs sell more tickets, and the top three teams in the group have the opportunity to compete in the AFC Champions League (ACL).

“Since we couldn’t play in the ACL, my players and I felt hurt,” said Hwang, whose team finished fourth last season.

While some teams are playing for pride or money, other clubs are hoping for a top spot solely to be free from the possibility of relegation. For Incheon, which was picked as one of the clubs to be demoted to second division, coming this far is already an achievement.

“When I first met our players, I told them to get good results so that we could avoid being relegated,” Incheon coach Kim Do-hoon said.

“The players did well, and we hope to play well in the remaining matches to be in the top six.”

Pohang and Jeju will clash with each other on Saturday at Jeju World Cup Stadium, and coaches from both teams have said that this match is critical to deciding their fate for the split.

Incheon meets Seongnam on Oct. 4, and both coaches think this match will be their most important. Incheon coach Kim Do-hoon is hoping veterans will lead the younger players, while Seongnam coach Kim Hak-bum is saying there will be no stepping back.

“We are not going to let our fate be decided by another team,” Seongnam coach Kim said. “We will be in the top group by our own ability.”

For Seoul, the derby - better known as “Super Match” - against Suwon on Saturday seems to be most the important match before they can think about the split. Seoul hopes to have a fresh start after losing 3-0 to Jeonbuk on Saturday.

“I’ll think about preparing for the match against Suwon until my head hurts,” Seoul coach Choi said. “If we can go home with a good result against Suwon, I think we will overcome difficulties that we had in the past.”

Of the top six teams competing for the upper group, one famous team is missing: Ulsan Hyundai.

The two-time K-League champion and the 2012 Asian Cup champion currently sits at 10th place, with seven wins, 12 draws and 11 losses.

Considering its reputation, fans are finding the current standing unacceptable and have been placing the blame on rookie coach Yoon Jung-hwan, who returned home after coaching Japanese club Sagan Tosu.

Mathematically, Ulsan does have a slim chance of getting into the upper group, but in reality, they need a miracle.

Currently, the team is nine points under No. 6 Incheon, meaning that they first have to win all three matches. Then, they need No. 6 Incheon, No. 7 Jeonnam, No. 8 Jeju and No. 9 Gwangju to lose all of their remaining matches before the split.

Ulsan faces Jeonnam, Incheon and Daejeon Citizen in their three matches, and all matches are must-wins. One positive bit of news is that the team is currently recovering their form, beating Jeonbuk 2-0, and is seeing injured players return to the pitch.

“We will show a different Ulsan on the ground,” Ulsan coach Yoon Jung-hwan said.

“In order to be inside the upper group, we will put our best efforts until the last moment.”