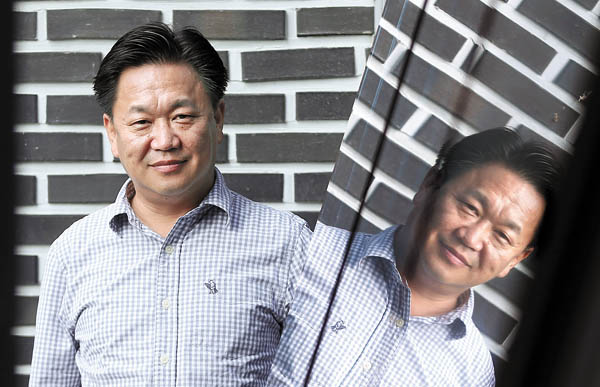 Meritz Asset Management CEO John Lee opened the first fund investing in Korean businesses in the American financial market, Scudder Investment Korea Fund, in 1991. He managed it for some 20 years. By Kim Seong-ryong

In Yeouido, the area in Seoul considered Korea’s version of Wall Street, there is the John Lee Fund - and there are other asset management companies.

The John Lee Fund refers to the programs offered at Meritz Asset Management, which nowadays manages to draw in massive investments like a black hole.

According to NH Investment & Securities, nearly 47.4 percent of total investment in the past month that flowed into the equity-linked funds in Korea - worth about 326.3 billion won ($272.7 million) - was placed in the Meritz Korea Fund.

CEO John Lee has run the company since December 2013, and since then, Meritz Asset Management has completely transformed.

Before he joined on, Meritz was one of the industry’s lowest performers, whose products’ return rates remained at negative levels; in 2013, they were at minus-3.47 percent.

But the following year, the manager saw its returns shoot up to 14.86 percent.

Lee’s success was largely due to his reformation of the fund’s corporate culture. He eliminated the rank-oriented communication system wherein subordinate employees were tasked with writing up reports or documents in order to relay their opinion or business matters to their managers.

“Ideas are something to carry out, not to be reported,” he said.

Lee spent his first two years of college at Yonsei University, majoring in economics, but dropped out in 1985 to study accounting at New York University. He spent the next 35 years in the United States, working at major financial institutions including Lazard Asset Management, Deutsche Investment Management Americas, Scudder, Stevens and Clark, and KPMG Peat Marwick.

He opened the first fund that invested in Korean businesses in the American financial market in 1991.

And Lee’s reasoning for returning to the country to take over Meritz was clear cut.

“I wanted to change Korea’s investment culture as well as its overall corporate culture with the experience and lessons I learned at firms in the United States,” he said. “It makes more sense to change such things at the bottom than in the market’s No. 1 institution.

“I also wanted to bring in the Silicon Valley business culture, in which investors make money by investing in quality businesses and help bright corporate owners further develop their companies,” he stressed.

At Korean companies, it’s typical for entry-level employees and lower-rank managers to work overtime to write formal documents to be submitted to upper-level managers and executives. Junior employees cannot directly deliver their ideas or opinions to executives. They are only allowed to convey their business ideas to the next senior worker up the rank and file. And communications must take the form of an official document or presentation.

Each of the asset management teams at Meritz consists of nine managers of different ranks, ranging from entry-level managers to director-level managers. Here, a newbie manager can casually make investment proposals via email or by directly taking to the director.

This process has made communication in the company easier, faster and more efficient. Meanwhile, Meritz’s management reports have also been overhauled.

These reports are usually written in short sentences packed with investment jargon. But at Meritz, the management reports are long, yet written in a way that makes it easy for anyone to understand. In this way, all clients can stay on top of their investment decisions and remain fully informed.

Lee’s investment principles, which he emphasizes at lectures for investors and college students, have also contributed to Meritz’s success.

“Don’t just work hard; make your money work for you,” Lee said. “Are the wealthy people laborers or capitalists in a capitalist society? You have to become a capitalist to make money. Not everyone can found their own business, so buying stocks is a good way [to be a capitalist].”

He added that investment should be made selectively and geared toward companies with potential that could likely survive another decade and still generate profits.