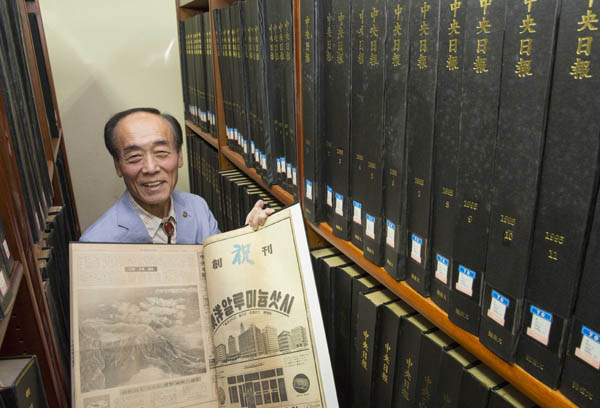 Choi Kyung-cheon displays the JoongAng Ilbo’s first issue at Honam University library, where the papers he collected for 33 years are stored. By Oh Jong-chan

Choi Kyung-cheon, 71, a resident of Gwangju, has read the JoongAng Ilbo, an affiliate of the Korea JoongAng Daily, every day since it was first published in 1965.

Up until Sept. 21, he has collected 15,748 newspapers for some 50 years, starting when he was a university student.

Decades ago, before newspapers were delivered in plastic bags to protect them from inclement weather, he would personally visit the JoongAng Ilbo headquarters to retrieve a copy for his archive.

And when he wasn’t at home, he would ask his family or neighbors to collect the paper for him.

“During the Gwangju Democratization Movement in the 1980s, the paper wasn’t delivered for about 20 days,” Choi recalled. “I would try to get the paper through any means possible; I asked around everywhere, and people I knew brought copies from Seoul.”

Choi considers the newspapers to be valuable assets and stores them in a separate room in his home. As the papers piled up, he gave up on the idea of moving, concerned he would lose or damage his collection.

In September 1998, he donated the newspapers he had collected for the past 33 years to Honam University in Gwangju.

Those papers, which stood 10 meters high and weighed 1.5 tons, were bound and stored at the school’s library.

A former announcer at KBS Gwangju Broadcasting Station, Choi said the JoongAng Ilbo served as an indispensable tool that helped him follow current events and the flow of history.

“The Joogang Ilbo is like a garden that is mowed and manicured daily,” the 71-year-old said. “It provides us key news and background, and offers a plethora of information on how to live. It’s like a garden with carefully selected flowers.

Choi chose the morning poetry section, its Korean poem competition and its Korean language section as the publication’s most distinctive attributes.

“Other newspapers publish English, Chinese and Japanese communication sections in their issues, but not a section that deals with the Korean language,” Choi said. “The JoongAng Ilbo started to publish it first. My sister reads it to improve upon her Korean writing skills.”

Since he first donated his archive, another 17 years has passed and the newspapers are stacking up in his house again.

“These days, people can read the PDF version of the newspaper online. But I won’t give up on collecting them. I will leave them to my children,” Choi said. “I think newspapers are best for teaching us useful wisdom for our lives.”