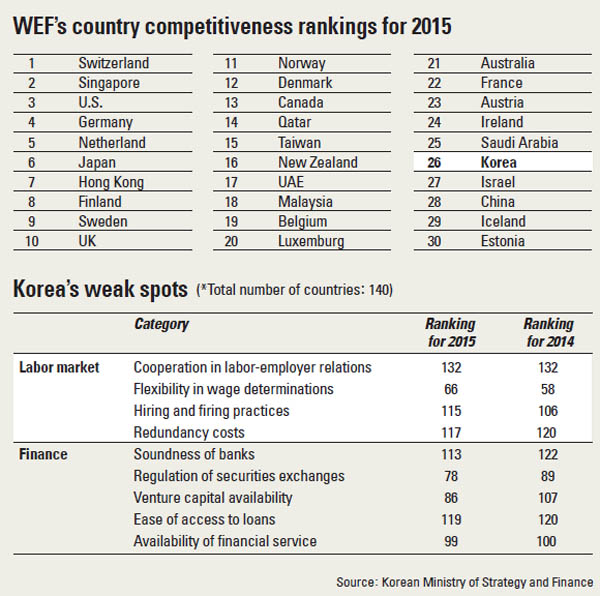 Korea held on to its lowest-ever grade in the global competitiveness ranking by the World Economic Forum (WEF) for the second year in a row, held down by ineffectiveness in the labor market and financial sector.

An annual report released Wednesday by the Swiss-based nonprofit institution, titled the WEF Global Competitiveness Report, showed Seoul ranking 26th among 140 countries this year, the same as in 2014.

Also known as the host of the Davos Forum, the WEF assesses economies across the world based on 114 categories composed of 34 official statistics from international organizations, such as the International Monetary Fund, and 80 surveys of company CEOs.

After peaking at 11th in 2007, Seoul’s rating has plummeted to between 25th and 26th since 2013, mainly due to a lack of breakthroughs in labor disputes, financial markets and innovation in corporate management.

Reforms in labor and the financial markets have been a core pledge by the Park Geun-hye government, along with structural changes to the nation’s education and public administration systems.

The top three countries were unchanged from 2014. Switzerland topped, followed by Singapore and the United States. A group of European countries also received high ratings, including Germany (4th), as well as some Asian economies such as Japan (6th) and Hong Kong (7th).

The government’s budget balance was the only category that fell in the category, to 19th from 14th, as slower-than-expected growth pushed the Ministry of Strategy and Finance to keep its expansionary fiscal plan.

Social welfare ranked higher this year. The quality of overall infrastructure improved to 20th from 23rd, while public health and primary education climbed to 23rd from 27th.

Despite the improvements, Korea’s ranking was kept down by pro-
blems in the labor market and financial sector.

Cooperation in labor-employer relations was almost at the bottom, ranking 132nd among 140 countries. Hiring and firing practices also deteriorated to 115th from 106th. Female participation in the workforce held the previous year’s ranking of 91st.

Many categories in finance also ranked near 100th. The soundness of banks, which ranked at 122nd in 2014, inched up to only 113th.

The availability of financial services slightly improved to 99th from 100th.

The overall growth in Korea’s financial markets weakened to 87th from 80th from a year earlier, the report said.