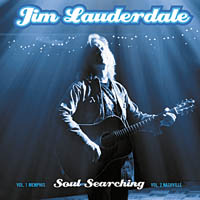 Jim Lauderdale’s “Hee-Haw’’ humor and sycophantic shtick on his SiriusXM radio show make it easy to underestimate him as a songwriter.

Lauderdale, a two-time Grammy winner, may not sell a ton of albums, but he has worked with many top artists in a wide range of styles during his three-decade career. And he refuses to be confined to a single genre on his new 26-song set, half recorded in Memphis and half in Nashville.

The Memphis music locks into an R&B groove that stalls on a couple of long ballads before gaining momentum. Lauderdale drops down half an octave to sing “Super Power’’ to excellent effect, and the closing ”Mysterious’’ is good and fast. The Nashville volume is more consistently entertaining because the songs are stronger, and stranger. “I’m Just the Lookout’’ is inspired by either sci-fi or psychedelics, and “Signals from Space’’ is out there, too. “Plan B’’ addresses disaster management, and the topical “One Big Company” laments the loss of the mom-and-pop shop. These whimsical tunes are reminiscent of Roger Miller or Tom T. Hall - “Hee-Haw” at its best. AP