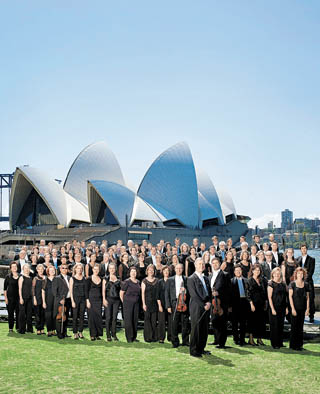 Under the baton of David Robertson, the Sydney Symphony Orchestra will be performing two concerts at the Seoul Arts Center. Provided by Keith Saunders

The Sydney Symphony Orchestra and its new artistic director and chief conductor David Robertson will be visiting Seoul at the end of this month. Although this will be the orchestra’s second visit to Seoul, having performed here in 2011 under the baton of Vladimir Ashkenazy, it will be American maestro Robertson’s first visit.

When the Sydney Symphony Orchestra visited Seoul in 2011, its collaborations with pianist Evgeny Kissin and cellist Mischa Maisky received enthusiastic responses from the audience. This year, two internationally acclaimed musicians will again be joining the orchestra.

Pianist and Chopin specialist Li Yundi, popularly known as Yundi, will join the orchestra this year. After winning the first prize at the International Chopin Piano Competition in Warsaw in 2000 at the age of 18, Yundi became the youngest and first Chinese winner in history of this prestigious competition. He was the first participant to be awarded the First Prize in 15 years. He will join the orchestra on stage on the first day of the concert and perform Chopin’s Piano Concerto No. 1. On the second day, violinist Vadim Repin will join the orchestra to perform Bruch’s Violin Concert No. 1. The Belgian-Russian violinist achieved worldwide fame when he won the Queen Elisabeth Competition in Brussels at the age of 17, becoming the youngest winner in this premier violin competition. Now 44, Repin is touring across the globe, performing with international orchestras including the Berlin Philharmonic, the Vienna Philharmonic, the London Symphony Orchestra and many more.

Prior to the concert, some orchestra members and the maestro will also hold a master’s class at Seoul National University. According to Sena, the company organizing the Seoul concerts, 15 members of the orchestra and Robertson will visit the university on Oct. 28 and meet with Korean students and hold music lessons for different sessions in the morning before coming together in the afternoon to hold a collaboration performance with all the students and orchestra members under Robertson’s baton.