Oh unfazed by his habit of breaking big records

Oh unfazed by his habit of breaking big records 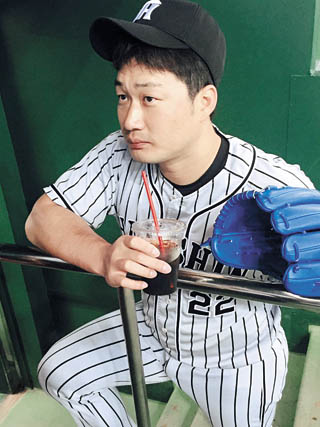 Hanshin Tigers pitcher Oh Seung-hwan at the dugout in the Tokyo Dome on Sept. 23 before a game against the Yomiuri Giants. By Lee Hyeong-seok

TOKYO - When Oh Seung-hwan was pitching for the Samsung Lions in the Korea Baseball Organization (KBO), the 33-year-old right-hander was always the last man on the mound. In his nine seasons with the Lions, Oh collected 277 saves, the KBO career
record.

Even after moving to the Hanshin Tigers in Nippon Professional Baseball (NPB) last year, Oh’s reputation lives on. In Japan, he won the best closer title for the Central League of the NPB and became the foreign pitcher with the most saves in Tigers history.

After collecting his 41st save on Sept. 25 against the Hiroshima Toyo Carp, Oh tied the NPB single-season record for most saves by a foreign pitcher, which was previously held by American pitcher Marc Kroon.

However, Oh’s attempt to set a new record came to an end last Saturday, as he was dropped from the roster for the first time due to a thigh injury . Oh, the five-time saves title winner in the KBO, ended his second season with the Tigers with a 2-3 record with a 2.73 ERA and 41 saves in 63 games.

The Tigers later said the reason they excluded Oh from the roster is to give him a rest so that they can use him in the postseason.

Oh’s contract with the Tigers ends after this season, and rumors have been circulating about his next destination. Before Oh was injured, Ilgan Sports, an affiliate of Korea JoongAng Daily, met the two-time Korean Series MVP in Tokyo on Sept. 23 to hear about his future plans and life in
Japan.

Q. How do you feel about setting a new saves records with the Tigers?

A. When I pitch, I don’t think about setting records. I just do my best, and the records follow. You know, the only thing I can do is get saves. So far, there is no specific record that remains in my memory.

Many people believed that getting 30 saves in your first season in Japan was successful enough, but you performed even better. Did you expect to do so well here?

As I said, I don’t appear on the mound to set a record or get a good performance. I never think about it. In fact, a closing pitcher can collect saves only if the save situation is in place.

Your contract with the Tigers will expire after this season. Although there is still the postseason left, how would you rate your life with the Tigers for the last two years?

There were many things that helped my baseball life. Many fans told me that the level of Japanese baseball is way better than Korean baseball, but as I experienced it, that’s not always true. In some areas, Korea is better than Japan.

Do you have a plan to play in Major League Baseball?

Since the season is not finished yet, I’m cautious to talk about this issue. I’m currently discussing this issue with my agent.

But don’t you have a dream to play in the big leagues?

As a player, of course I have to want the challenge [of the big leagues.] But since I’m in the middle of the season, it’s not right to say I will go for it. Our team is in a tight race for the league standings, and my answer could poorly influence the team’s atmosphere. I just want to focus on my games. My agent will look for detailed things, and I just want to focus on playing baseball on the ground.

For you, what does a challenge mean?

If you are an athlete, you need to continue playing until you quit. You need to challenge and push yourself because that way, you can improve.

This season, you pitched more forkballs. Why?

I prepared it from the past, hoping it would work in the future. After I pitched the forkball, our catcher also told me it was good, so I just decided to throw more forkballs.

In the middle of the season, you were struggling to play well. Why?

I know it’s an excuse, but during the offseason, I was injured and couldn’t exercise much. In the middle of the season, I had a cold and was even hospitalized.

What is more difficult about playing in Japan compared with playing in Korea?

The way the team moves to other cities is different than in Korea. In Korea, the whole team moves on a bus late at night after a game. But in Japan, you move the next morning by yourself via the Shinkansen [high-speed railway]. You also need to wear a suit. I’m adjusted to this style, but it’s still challenging.

How is your relationship with your girlfriend [Girls’ Generation’s Yuri] these days?

It’s the same as other people. We both like baseball, and when I set records, she knows all about it.

How do you react when seeing negative comments online?

There is no end if you care about all those comments. There are things that you need to accept, and if you think about it too much, it’ll be hard. I think reactions to my performance are natural because I’m in a position where I get a lot of attention. That’s why I have to be careful about my behavior.