Volkswagen says over 120,000 rigged cars were sold in Korea

Volkswagen says over 120,000 rigged cars were sold in Korea 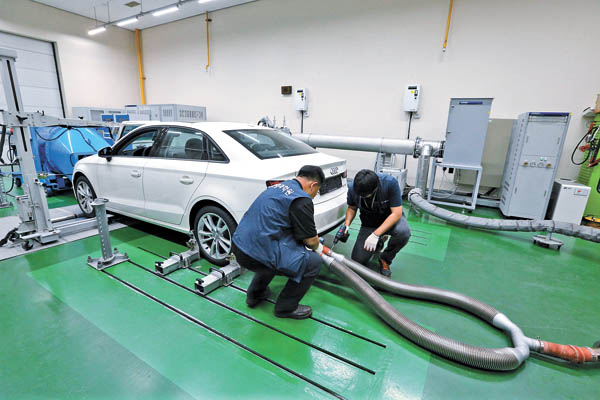 An Audi A3 is tested at the National Institute of Environmental Research in Incheon on Thursday. The same day, five other models by Volkswagen Group were also examined. By Shin In-seop

About 120,000 cars made by Volkswagen equipped with software used to cheat emissions tests were confirmed sold in Korea.

According to a statement released by Audi-Volkswagen Korea on Thursday, a total of 121,038 cars equipped with the software and the problematic EA 189 diesel engine were sold in Korea since 2009. These included 92,247 Volkswagens, including the Golf hatchback and Tiguan SUV, and 28,791 Audis, including the A4 and A5.

Volkswagen Korea said the figures are tentative data aggregated by its headquarters in Germany.

Despite Volkswagen’s admission that it planted software to make emissions reduction devices operate only during lab tests, the Korean government said Thursday it started running its own emissions tests on Volkswagen vehicles.

The government added that it will consider suspending the sales of the tested models if any violations are found.

The cars went through a lab test during which the models were run from zero to 120 kilometers (75 miles) per hour with the heating and air conditioning systems turned off.

The cars will also go through a road test under actual driving conditions to find out whether the emission reduction device operates properly.

The test will be conducted for between 90 and 120 minutes for each vehicle on Oct. 6, and the results are expected to be released some time next month.

If the cars don’t pass the tests, the ministry will consider prohibiting sales of the models, and cars already sold will likely be recalled.

If it appears that the emissions reduction devices were unlawfully controlled to pass the tests, the government will consider revoking the models’ environmental equipment certification, which would mean that Volkswagen would be unable to import the cars to Korea in the future.

The ministry will also fine the automaker if it finds out the cars were developed differently from the cars that received the certification.

However, the imposed fine will likely be less substantial than in other countries affected by the widening scandal.

But in Korea, automakers can only be fined up to 1 billion won per model, rather than each individual unit sold.

“But the punishment regulations can be changed in accordance with the country’s legal boundaries. We will consider raising the upper limit of such fines in cooperation with the Ministry of Land, Infrastructure and Transport, the Ministry of Trade, Industry and Energy and the National Assembly.”

The ministry said Volkswagen Korea has submitted a plan for a recall, but it isn’t sure when the cars can be recalled, since the ministry said it will make its decision after the German government’s investigation is made.

The ministry added that it will also expand the inspection into diesel cars made by local automakers including Hyundai Motor and Kia Motors after finishing the tests on the foreign cars in December.