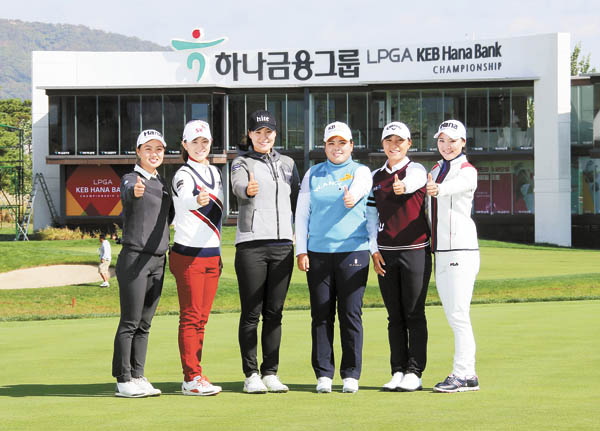 From left: Minjee Lee, Choi Na-yeon, Chun In-gee, Park In-bee, Lydia Ko and Ryu So-yeon raise their thumbs in approval at the Sky 72 Golf Club in Incheon on Monday before they play the LPGA KEB-Hana Bank Championship today. The only LPGA Tour event held in Korea features 78 golfers who will be playing until Sunday, with the winner getting 300,000 dollars. Provided by the event organizer

Following the global excitement of the Presidents Cup that rocked Korean golf fans, Incheon is again set to now host most of the world’s top female golfers for the LPGA KEB-Hana Bank Championship.

Entering its 10th edition at the Sky 72 Golf Club today, it is the only LPGA event to be held in Korea.

With the winner getting $300,000 from a total purse of $2 million, 78 golfers, including world No. 1 Park In-bee and No. 2 Lydia Ko, are taking part. In fact, among the top 20 players in the world, only Stacy Lewis, Brooke Henderson and Lee Bo-mee will be absent.

The event is held as Park and Ko are in the midst of a battle for the top position in world ranking. Park, 27, took top place from Ko in early June when she won the KPMG Women’s PGA Championship. Currently, Park is on top with 12.78 points, barely ahead of Ko, who has 12.52 points.

Not only is the world ranking up for grabs between the pair, but all of the LPGA’s biggest season-ending awards are still a close race. Ko is barely trailing Park for the Rolex Player of the Year and top prize money title.

There are only five LPGA Tour events remaining on the season schedule. With the Tour’s Asian event continuing in China, Taiwan and Japan after Incheon this week, the season concludes in Mexico and Florida.

For Park, who achieved a career Grand Slam after winning the Women’s British Open this year, this could be a critical event to wrap up the season. Though she is the 16-time LPGA Tour winner and has seven major title trophies, she has never won an event held in her home country.

Park has broken her routine to improve her chance of winning.

“I don’t practice on Monday, but since I needed to find some solution, I grabbed the putter [to practice],” Park said on Monday.

Park, who celebrated her first wedding anniversary on Tuesday, said she has been stressed because of her putting and joked she might get ill because of the pressure, which brought laughter to players and reporters at the press conference.

“I thought my putt at the Evian Championship was the worst, but it got worse at the Sime Darby LPGA event in Malaysia last week,” said Park, who finished 15th in Malaysia. “It’s time to make some change.” However, despite winning four events this season, she said she isn’t thinking too much about winning the title. She said she just wants to “enjoy” the sport.

“I have achieved a career Grand Slam, so my last goal for this season is to enjoy Asian events sincerely,” she said.

For the first round, Park will tee off with Paula Creamer and Ryu So-yeon. Ryu, the 2011 U.S. Women’s Open champion, hasn’t collected a win since last August.

“Among the players here, I should be the player who is most hungry to win this event,” Ryu said.

Ko said she also wants to enjoy the event and collect a better result than last year when she finished 29th.

The Korea-born Kiwi is paired with Korean-American Alison Lee, who experienced her first golf event in Korea last month at the Hanwha Financial Classic, and the 2015 U.S. Women’s Open Champion Chun In-gee.

Chun, 21, is also currently the money leader on the KLPGA Tour this season with four wins. She is coming off her second major trophy in Japan, the Japan Women’s Open on Oct. 4.

“After I got a runner-up finish last year, I had a desire to play in the LPGA events,” she said. “I expect there will be good games.”

Choi Na-yeon, who has two wins this season, is making a comeback after she was sidelined due to lower back pain since the British Women’s Open in July. The 27-year-old is two-time winner of the event, lifting the trophy in 2009 and 2010 in addition to her runner-up finish in 2011.

Choi is paired with another two-time winner, Suzann Pettersen of Norway, who triumphed at the event in 2007 and 2012, along with China’s Shanshan Feng.

It will also be a good chance for local golf fans to see Hall of Fame golfer Juli Inkster playing. The 55-year-old American, who has 31 wins in the LPGA Tour, is paired with Japan’s Ai Miyazato and 2013 champion Yang Hee-young (Amy Yang).

Fans should also watch out for LPGA Tour rookie Jang Ha-na. The 23-year-old hasn’t collected a win in the LPGA Tour this season, but she did win two KLPGA events held in her homeland this year. Another LPGA rookie Kim Sei-young will be looking for her third win this season after winning her second in April.

Dozens of KLPGA Tour golfers are playing in the event. They were selected based on their money rankings, and they will also be striving to win the event because the champion will have a full-time tour card for next season in the LPGA Tour.

Defending champion Baek Kyu-jung (Q Baek) also went on to the LPGA Tour after winning this event in a three-way playoff last year. She will tee off with 2011 champion Yani Tseng and Morgan Pressel.

Excluding Chun, who already accepted the LPGA membership for 2016 after winning the U.S. Women’s Open, Park Sung-hyun is the top contender among Koreans. The 22-year-old is currently second in money earnings and has three wins this season in the KLPGA Tour, including a major Korea Women’s Open.

Park, who is also No. 1 in driving distance, is paired with another long-range hitter Michelle Wie and Lexi Thompson.

Lee Jung-min, who is third in money rankings and second in MVP points in the KLPGA Tour, will have a showdown with rookie Kim Hyo-joo and Korean-Australian golfer Minjee Lee.

Cho Yoon-ji, who is No. 4 in KLPGA Tour earnings, will get good experience by teeing off with Jessica Korda, who is coming with a four-shot victory at the Sime Darby LPGA Malaysia over the weekend, and Mo Martin, the 2014 Women’s British Open champion.

Ko Jin-young, who has three wins in the KLPGA Tour this season, aims to repeat her performance in the Women’s British Open this year, where she finished second to Park In-bee.