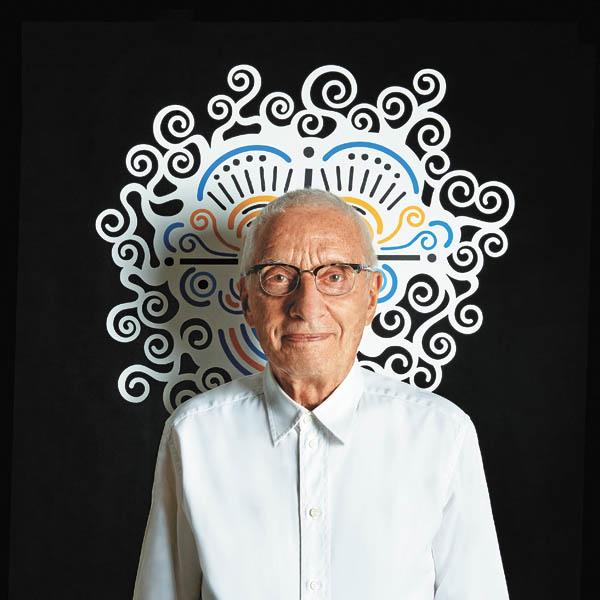 Italian architect and designer Alessandro Mendini is holding a grand exhibition at the Dongdaemun Design Plaza in Seoul through February. Provided by the organizer

Many say that Koreans are the Italians of Asia. The inhabitants of both peninsulas share many characteristics, which is why world-renowned Italian architect and designer Alessandro Mendini says that he likes working in Korea.

“Koreans’ way of thinking is very much similar to mine,” Mendini said. The 84-year-old, who is cited as a key figure in the development of Postmodern design in Italy, has been active in collaborating with Korean companies and artists including Samsung, LG, Posco and SPC. Mendini also served as editor-in-chief at influential magazines Casabella, Domus and Modo in the 1970s and ’80s. 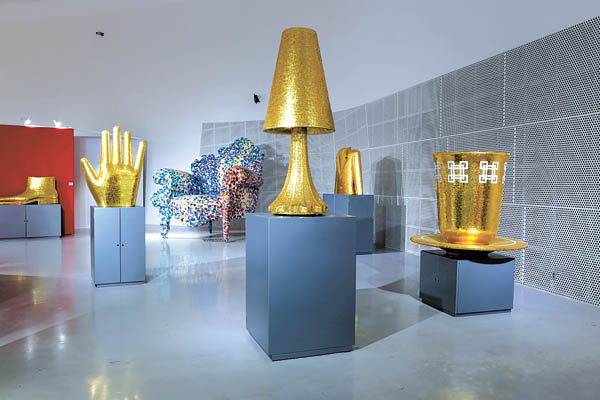 The Too Big Too Small section of the exhibition displays cabinets with large sculptural objects in gold mosaic on top. Provided by the exhibition

“The way Western people think and Asians think tends to be very different, but in my opinion, Koreans’ characteristics are very similar to Italians, especially the tendency to seek novelty,” he continued.

For his Korean fans, Mendini has organized a grand exhibition, the biggest in Asia according to the organizer, at the Dongdaemun Design Plaza in central Seoul. The exhibition, which kicked off Oct. 9 and will run through February, is titled “The Poetry of Design.”

The exhibit features about 600 works in a “labyrinthine interweaving of the poetic and the theoretic,” showing Mendini’s life works, his inspirations, design thinking and so on. In the Childhood section, visitors can witness Mendini’s innocence and desire to realize his childhood dream of becoming a cartoonist. The characters he designed for Baskin Robbins in collaboration with SPC will capture the attention of families and young visitors. 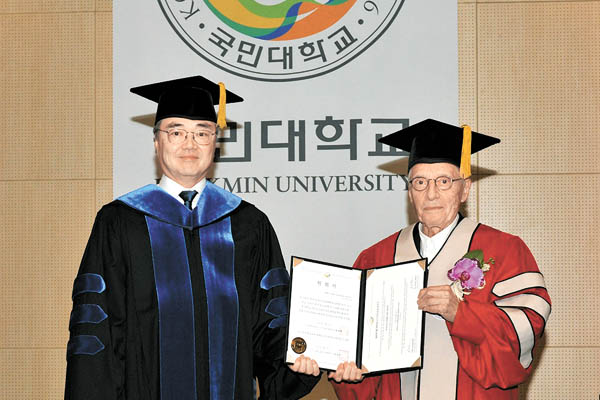 In the Lots of Dots section, visitors can see the iconic Proust armchairs including the one he designed in the Korean patchwork style. Mendini’s signature piece - the Anna G bottle opener - that brought him international fame is also exhibited in the Bel Design section, along with many of his collaborations he did with Korean companies including Hankook ceramics as well as the Samsung Electronics Gear S2 smartwatch.

Furthering his relationship with Korea, Mendini received an honorary doctoral degree in design from Kookmin University, which has a strong reputation in design.

To learn more about his work and thoughts on Korean design, the Korea JoongAng Daily sat down with Mendini on Tuesday at Kookmin University in Seoul for an interview. Here are some edited excerpts.


Q. How did your relationship with Kookmin University begin and how significant is this honorary doctorate is for you?

A. The relationship with Kookmin University goes back many years. I got to know the university through Choi Kyung-ran, the dean of the Graduate School of Techno Design at the university, who was professor back then. Since then, I got to hold lectures here and meet with many students. Once, the president of the university visited Milan and he talked about this honorary doctorate and I was thankful that he understood what I do, and I believe this also indicates that I will continue helping out with the design education in Korea. 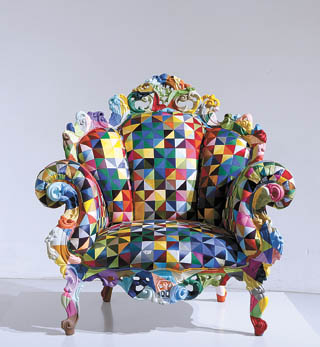 You said you’ve met with many Korean design students over the years. Do you see developments?

My experience with Korean students goes back 15 years. I’ve met with many, every time I visited Korea, and back then, what can I say, they had strong local color. It wasn’t easy for them to find their own identities [in design]. When I met with Korean students who came to Milan through exchange programs, I also found that many of them didn’t understand their own Korean traditional handcraft works.

But now, when I meet with students, I can see that many of them have their own identities and they understand about traditional handcrafts and even try to create their own. So I feel like even though they go into large industrial companies to work, they will be able to work innovatively with an open mind.

Why are you drawn to colors?

Many people ask me this question but I can’t seem to give them a clear answer. But what is clear is that I was greatly influenced by Western avant-garde art and cubism. Because I had a lot of opportunities to look at such art works, I think inside my head has been full of those things since young. When I was a young boy, the walls in my house were covered with art. Large paintings that could cover the entire wall from the ceiling to the floor were hung up everywhere so I believe my works are influenced by my childhood.

It sounds like being exposed to art at a young age is important.

In my opinion, since you are 1 [years old], you are influenced by what you see and feel. Therefore, I do believe it is very important. I’ve also experienced war like the others in my age group, for about four years. For those years, I experienced fear, hunger.

I saw many people dying and began to be afraid of death. That’s why I started having a religion. Maybe such experiences are the reason why I use so many colors in my work. I believe colors make people have composure and happiness.