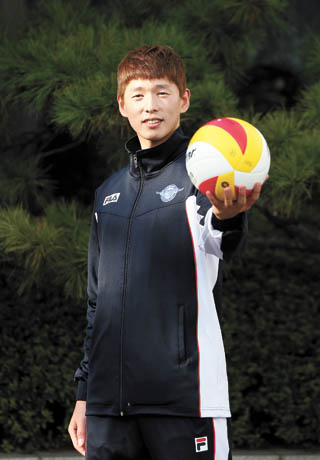 Han, who returned after finishing his two-year military service, is the league’s highest-paid player, earning 500 million won ($445,000) a year.

With the return of 29-year-old Han, the Jumbos, who finished fourth last season, got off to a good start in the league opener, edging last season’s third place Kepco Vixtorm 3-0.

On Wednesday, the Jumbos also beat the Samsung Fire Bluefangs 3-0 to stay undefeated, proving they are the contenders for the championship title this season.

In an interview with the JoongAng Ilbo on Tuesday, the 1.89-meter (6-foot-3) Han said he knows that there are a lot of expectations on his play, and although his shoulder injury has not completely healed, his ongoing challenge is to win the championship.

Q. What do you think about the Jumbos being tabbed as favorites to win the championship?

A. I heard we are the favorites because I returned to the team (laughs). I think our team’s biggest problem was the cohesion between the setter and the attacker. I joined the team in August after finishing my military service, but still, there are some things I needed to work on with my teammates. I also have high expectations for this season’s championship. We haven’t had a double since 2005, and in the 2010-11 season, we lost to the Bluefangs in the championship series despite winning the regular season. I wanted to break the dynasty of the Bluefangs, but OK Savings Bank already did it. Like many members who experienced the 2010-11 victory, I have a strong desire for the trophy.

Did you think about volleyball a lot while doing your military service?

After I started my military service in November 2013, I didn’t watch volleyball because as I watched it, I got stressed. I visited my team briefly, but every time, coach Kim Jong-min seemed to have a grim face. He seems to be stressed a lot, but there was nothing I could do. After I had surgery on my right shoulder last November, I had some negative thoughts, doubting whether I could play better volleyball in my condition. Then, I couldn’t think about my team or the coach, I was just busy making my body healthy.

It’s not 100 percent fit. It’s an injury that any volleyball player would have. It will be better as time passes. I’m frequently exercising my shoulder during my personal time. My wife told me to take a rest and not rush going back to the court. But in the match, I just forget about my shoulder’s condition.

How did you spend your military service?

I could have gone to Sangmu (Korea Armed Forces Athletic Corps) to maintain my volleyball sense and rhythm, but instead, I chose to complete my service as a full-time reserve member [who can commute from home to military]. During this time, I was sorry for my wife who has been looking after the house and raising our daughter. So during my two years, I also worked as a housewife, cleaning dishes and cooking food after my daily service. I was just a normal guy wearing training suits and throwing out trash. Using my time with my family as a motivator, I want to win the championship.

What about your chemistry with your teammate, right attacker Michael Sanchez?

Sanchez has told me that I’m a stubborn setter. Sometimes, he says I’m a “freak” because I give him an unexpected toss. But at the same time, I think he also has a freak temper, so we are trying to bring things together by frequently talking together. But I won’t concentrate my toss to Sanchez. I will toss the ball to each player’s taste.