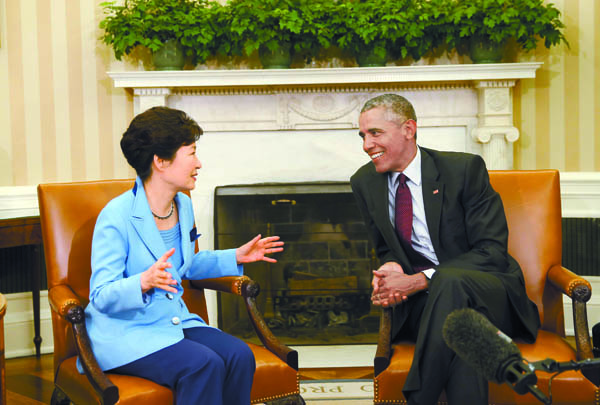 As President Park Geun-hye returned to Korea Sunday following her four-day trip to Washington, she appears to have quelled concerns raised there over Seoul’s friendliness toward China.

Park’s presence at the military parade in Beijing to commemorate the 70th anniversary of the end of World War II last month was believed to have prompted anxiety in Washington, as the event was shunned by most democratic nations.

But the alleviation of jitters over Seoul’s close ties with its eastern neighbor in recent months was best captured by Park’s visit to the Pentagon on Thursday with Defense Minister Han Min-koo. The scene of the South Korean leader receiving a full military honor parade upon her arrival to meet with U.S. Defense Secretary Ash Carter appeared to symbolize strong alliance between the two nations, observers said.

“The major mission [of the trip] was to dispel worries in Washington that Seoul was leaning toward Beijing. The scene of President Park watching a full military honor parade at the Pentagon has served to ease those worries raised by the picture of Park last month in Beijing watching a military parade alongside President Xi Jinping,” said Yun Duk-min, director of the National Diplomacy Academy, on Sunday.

The full military honor parade for Park, which was the first during Secretary Carter’s tenure, appeared to have symbolic meaning as it was reminiscent of the military parade Park watched last month in the capital of the world’s second-largest economy.

“Park’s chanting ‘We go together’ with U.S. military officials at the Pentagon symbolized further strengthening of the Korea-U.S. alliance and was therefore a meaningful display,” Cho Nam-hoon, a research fellow at Korea Institute for Defense Analyses, noted.

Another major theme of Park’s second official visit to the U.S. was the reaffirmation of the two allies’ firm stance on dealing with North Korea, particularly over its nuclear ambitions, which the two leaders pledged would be addressed with “utmost urgency and determination” in a joint statement issued following a summit at the White House on Friday.

The fact that the joint statement specifically touched on the issue of North Korea in an unprecedented case reassured a sense of urgency felt by the two nations in stopping Pyongyang from developing nuclear weapons.

In the joint statement, the two made clear they would not accept North Korea as a nuclear weapons state and stand ready to impose additional sanctions should the North choose to ignore international warnings in regard to its nuclear program and development of ballistic missiles.

“We oppose any actions by North Korea that raise tensions or violate UN Security Council resolutions. In particular, if North Korea carries out a launch using ballistic missile technology or a nuclear test, it will face consequences, including seeking further significant measures by the UN Security Council,” the statement read.

The two allies, however, left open the possibility for talks with Pyongyang to possibly remove economic sanctions. President Obama said the Kim Jong-un regime had to be serious about giving up on its nuclear programs, a scenario repeatedly rejected by the Communist nation.

“At the point where Pyongyang says, ‘We’re interested in seeing relief from sanctions and improved relations, and we are prepared to have a serious conversation about denuclearization,’ it’s fair to say we’ll be right there at the table,” Obama said at the joint briefing Friday following the summit with Park.

The term “utmost urgency and determination” in the statement on the North Korea issue and Obama’s mention of coming to the table for talks came after a year of the Obama administration’s so-called strategic patience with Pyongyang, which critics say shows a lack of resolve by the administration to resolve the complicated issue of the North Korean nuclear impasse.

“Washington’s hands were tied in recent years when it came to North Korea as it had been preoccupied with dealing with trouble in the Middle East. The fact that the two nations now see resolving the North Korean nuclear issue as the utmost diplomatic priority carries significant meaning,” said Park Ihn-hwi, a professor of international studies at Ewha Womans University.

While Washington appears to be turning its attention toward resolving the stalemate over North Korea’s nuclear program, it remains to be seen whether talks, such as the six-party talks suspended since 2008, could be arranged in coming months to persuade the North to abandon its nuclear ambitions at a time when Obama has one year left in office.

“The joint statement is filled with preconditions that Pyongyang must fulfill [to resume talks]. It remains unclear whether [the summit] could provide new momentum that could lead to a solution on North Korea’s nuclear program,” said Moon Chung-in, a professor of international studies at Yonsei University.