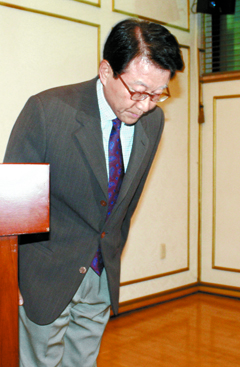 Samsung Lions President Kim In makes an apology on Tuesday in Daegu for their players’ gambling scandal. [newsis]

After the Samsung Lions announced they will not include players suspected of illegal gambling overseas in the Korean Series, the Korea Baseball Organization (KBO) is now saying the punishment for the players will be heavier if their charges are proven.

Kim In, the president of the Lions, held a press conference Tuesday night to announce that players who are suspected of gambling will not play in the championship series. But he did not reveal the names of the players, saying the investigation is ongoing and the allegations against players have not been confirmed.

“We are deeply sorry for not managing the team thoroughly,” Kim said. “Regarding the gambling case, we will actively cooperate with investigative authorities once they request it.”

Although the Lions did not reveal the names, the players will likely be identified, as the deadline for submitting the Korean Series entry is this Sunday.

As a regular season champion, the Lions, who are looking for their fifth straight championship, are scheduled to face the winner between the NC Dinos and Doosan Bears in the best-of-seven series next week. The Daegu-based club also said that suspected players are not training with the team starting Wednesday.

Police said on Saturday that they will begin an investigation into two Lions players on suspicions of illegal gambling overseas. Separately, prosecutors have also been looking into the case. Local media has been reporting that three Lions pitchers are involved.

The KBO said that it is also following the issue, and there will be punishment if players are convicted.

“Separately from the court’s decision, we have our own rules to punish them,” KBO Secretary General Yang Hae-young told Ilgan Sports, an affiliate of the Korea JoongAng Daily, on Wednesday. “The punishment will be discussed once prosecutors start indicting them.”

The KBO already has a history of punishing players involved in gambling. In 2009, the discipline committee slapped Lions player Chae Tae-in and the LG Twins’ Oh Sang-min with a five-game ban, 2 million won ($220,000) fine and 48 hours of youth baseball community service after they were convicted of online illegal gambling.

But Yang said the punishment this time will be different. “Although we haven’t opened the discipline committee, the level of punishment will be more aggravated than in 2009,” he said.

Meanwhile, the KBO said that excluding the suspected Lions players from the Premier 12 squad is possible.