Oh, what a difference a minute makes

Oh, what a difference a minute makes 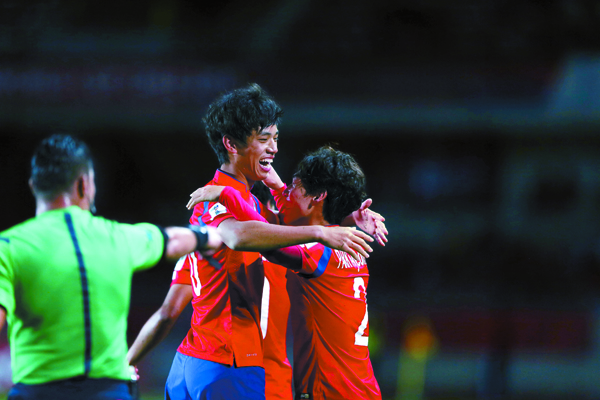 Korea’s Oh Se-hun, left, celebrates with teammates after scoring the goal against Guinea in their Group B match at the FIFA U-17 World Cup in Chile on Wednesday (Korean time). [Korea football association]

It took just one minute for Oh Se-hun to become a hero, as his injury-time goal in the 92nd minute of the game against Guinea on Wednesday sent Korea to the knockout stage of the FIFA U-17 World Cup.

Sixteen-year-old Oh’s left foot strike - at the Estadio La Portada in La Serena, Chile - sealed Korea’s pass to the final-16 stage of the tournament for the first time in six years.

“Guinea was quite difficult to beat, very fast on the counter with four good attackers,” coach Choi Jin-cheul was quoted saying to FIFA.com after the 1-0 win. “But their defense weakened in the second period, and we gradually gained the upper hand.”

Oh, the youngest member of the team, said he doesn’t have much recollection of the run-up to scoring the decider. “When I entered the pitch, I just tried to follow my coach’s orders and wanted to help my teammates,” he said.

“I can’t remember exactly the goal scoring situation, but I couldn’t believe that I scored a goal.”

After getting a surprising win against Brazil on Sunday, Korea remains on top of Group B. Earlier, Brazil beat England 1-0 and climbed up to the second position in the group.

Korea has its final match in the group stage against England on Saturday. Regardless of the result, the U-17 team has secured the birth at the Round of 16.

In this U-17 World Cup, the top two teams from each of the six groups advance to the knockout stage along with the top four third-place teams.

The victory is another historical moment in Korean men’s football history.

Choi’s U-17 team became the first Korean men’s football team to beat Brazil in any age level of a FIFA tournament on Sunday. After beating Guinea and securing the berth in the Round of 16, it also became the first team to reach the knockout stage in just two matches.

Until now, every team had to play the final match in its group (usually a group of four) to see whether they can reach the knockout stage or not. This time, however, Choi’s team doesn’t need a mathematical calculation to decide its fate.

Korea put the same lineup against Guinea as it lined up against Brazil, except for center back Choi Jae-young. He is out for the rest of the tournament after suffering a crucial ligament injury on his right knee during the Brazil game.

Korea’s offense was led by Lee Seung-woo, who tried to serve his teammates’ acute passes and penetrate the Guinea defense line. In the first half, the FC Barcelona B forward created a goal scoring situation with midfielder Kim Jin-ya but failed to put Korea ahead.

Guinea was more aggressive in the first half as they made nine shots, four on target. Naby Bangoura and Sam Diallo made a couple of shots outside the box, but they were all blocked by goalkeeper Ahn Joon-soo.

As Guinea got more threatening in the second half, coach Choi replaced midfielder Jang Jae-won, who scored the winning goal against Brazil, with Kim Seung-woo in the 52nd minute to stabilize the defense. Kim played central defender, while Lee Seung-mo moved up to center midfield to partner with Kim Jung-min. Probably Korea’s best scoring chance in regular time came in the 62nd minute, when Lee Seung-woo’s middle-range shot was blocked by Guinea goalkeeper Moussa Camara and was followed by another shot from Park Myeong-su in the box, which hit Camara’s leg.

The 0-0 deadlock lasted until Oh came on to the pitch in the 91st minute to replace Lee Seung-woo.

After Guinea’s defender Mohamed Camara failed to clear the ball, forward You Ju-an passed it to Oh who was moving up the left flank. The 190-centimeter (6-foot-3) forward from Ulsan Hyundai High School then fired a shot with his left foot to score the only goal of the game and seal a victory for Korea - about a minute after he entered the game.

Coach Choi said the team is now thirsty for more competition, and they are confident they have more to offer.

“We can still show a lot more in this World Cup,” Choi said. “So far, we have defended and countered well, but I think we can show a more offensive play. We have the players to do so.”

Until now, Korea’s best performance in the FIFA U-17 World Cup was in 1987 and 2009, when they reached the quarterfinals.