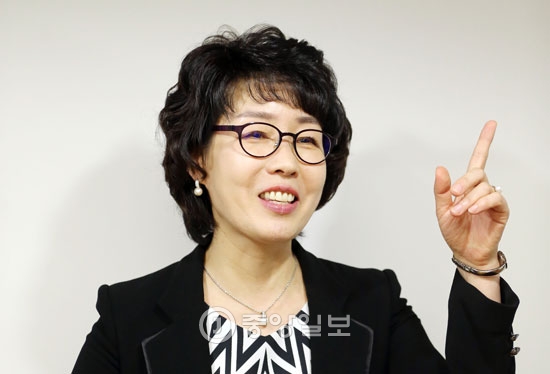 Heo Jong-suk is probably more renowned for being the mother of a math whiz than her recent foray into business.

The 54-year-old is the mother of Lee Su-hong, 22, the youngest gold medal winner in the International Mathematics Olympiad and the youngest student to enter Seoul National University.

Lee is currently a graduate student at the Massachusetts Institute of Technology. His mother, meanwhile, has turned her sights to business, founding a company that teaches not mathematics or science, but debate methods. Her educational institution, The Institute for Global Excellence, focuses on the philosophy of havruta, which involves learning in pairs.

“In 2010, when I was working for a company that developed content for educational purposes and publishing, the idea of havruta, an Aramaic word meaning ‘friendship’ came up in my head,” she said. “If my son had known this kind of study method, he could have studied mathematics even more in-depth.”

On Thursday, Heo invited Israeli guests - experts on scientific education and education for the gifted - to a seminar celebrating the establishment of her company.

“Beyond adopting a new debate method for students, I want to entirely change the way Korean society communicates,” Heo said, “because the havruta philosophy will be great help in places where creative and productive debates are not properly carried out.”

The JoongAng Ilbo, an affiliate of the Korea JoongAng Daily, recently sat down with the businesswoman for an interview. The following is an edited excerpt:

A. I think Korean debate methods differ from havruta. In Korea, we select a certain topic and split people into two teams - pro and con - to discuss the topic and argue against each other in order to win. However, havruta aims to draw a productive conclusion.

Can you explain the philosophy of havruta in more detail?

According to the philosophy behind it, one person takes the affirmative side on a certain topic while another takes the opposing side. The two make a one-to-one pair and start debating.

However, unlike the Korean style of debate, havruta changes the sides. Participants then come up with facts not previously mentioned to support their arguments. After both sides speak, the participants find a solution together.

Havruta, thus, does not decide a debate winner but finds a middle ground between the two participants. Although this debate style seems simple, the Jewish people have used it for more than 1,000 years at home and in school.

How did you become interested in Israeli debate methods?

I became interested in Israeli education for gifted children when I was raising my son. I was curious to know how 22 percent of Nobel Prize winners were from Israel, with population of 16 million, and how they came to dominate the American academic, political and financial arenas.

Then one day, I was introduced to an expert on Israeli education for gifted children, who told me about havruta. The more I learned, the more I wished I would have known about it earlier so as to better educate my son.

Do you have regrets?

In Korea, people tend to be reluctant to ask questions or express their thoughts. I also taught my son not to ask questions that could embarrass his teacher. So he had difficulty adapting to debating when he went to the United States. He said it was because he’s an introverted person, but I think it resulted from Korean culture, which makes people hesitate to express their thoughts.

I don’t think so. Imagine there is a difficult mathematics question. If students think together about the different ways to solve the problem, like using a geometric or algebraic approach and the pros and cons of each approach, and if they share their ideas, they can come up with a new solution. Debating is also important for learning and studying a subject in-depth.

Your son used to go to online mathematics research websites and ask mathematicians all over the world about the questions he got stuck on.

I think he learned the way to solve problems through online debates. He was friends online with many mathematically gifted people all over the world. But he doesn’t have a lot of experience debating or communicating with people face-to-face. I think that’s why Korean students aren’t as competitive in foreign countries.